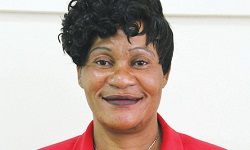 ZIMBABWE – Vice-President Emmerson Mnangagwa has demanded an apology from Zanu PF Women’s League secretary for finance Sarah Mahoka who on Wednesday taunted him, in the presence of President Robert Mugabe and thousands of party supporters, saying he was behaving like a duck.

Mnangagwa used the politburo meeting to protest to Mugabe over his public humiliation, although he indicated he would forgive Mahoka if she extended an apology.

Mahoka, a strong Generation 40 (G40) proponent and an ally of First Lady Grace Mugabe, challenged Mnangagwa to come clean on his presidential ambitions, before equating his silence to a duck, which takes no action even when its ducklets are attacked.

She shocked many by stating Mnangagwa risked dying, if he does not rein in those campaigning for him to succeed Mugabe.

Zanu PF sources said Mnangagwa, in a charged politburo meeting that spilled into Thursday morning, protested to Mugabe over the manner he was attacked. Mnangagwa also said his attack showed there was lack of discipline in the party.

“Anganditi dhakhisi pamberi pevana shuwa here (How can she call me a duck in front of kids),” Mnangagwa reportedly said.

“Dai anga auya totaura. Inga tinotaura mumameeting. Asi hazvina basa ndomuregerera kana akakumbirawo ruregerero. (If she had a problem she could have talked to me about it. We engage in meetings. But it does not matter, I will forgive her if she apologises.”

Mnangagwa also complained over Mahoka’s death threat and emphasised that since his appointment in 2014, there have been three break-ins at his office and that his office at Zanu PF headquarters was once laced with cyanide.

After Mnangagwa spoke, Mugabe said Mahoka should write a letter of apology.

Addressing hordes of party supporters who thronged the party headquarters ostensibly to “thank Mugabe for championing the cause of women while serving as the African Union chairperson”, Mahoka took the succession fight to Mnangagwa by challenging him to distance himself from those campaigning for him.

“This cannot go unchallenged. Who is Mahoka to say that to the vice-president of a country? We expected the president to rein her in at that moment because it is unheard of for such a junior member of the party to say what she said to the VP,” said one senior party official.

“That has never happened in the party and she did not just disrespect the VP alone but also the president himself.”

ZIMBABWE - Vice-President Emmerson Mnangagwa has demanded an apology from Zanu PF Women’s League secretary for finance Sarah Mahoka who on Wednesday taunted him, in the presence of President Robert Mugabe and thousands of party supporters, saying he was ...
Share via
x
More Information
x