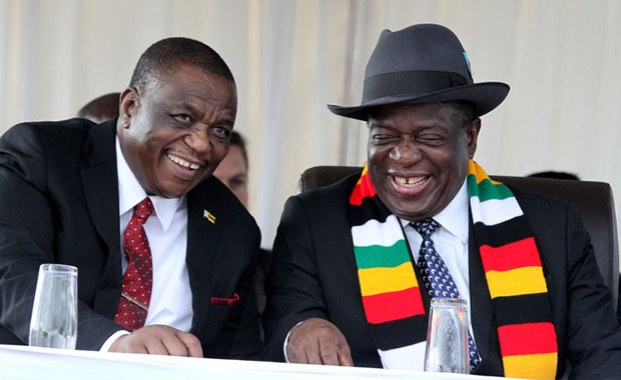 HARARE – New information emerging from Zanu-PF corridors indicates that the current factional fights in the ruling party are emanating from a 2017 power-sharing deal gone sour, source has gathered. Pressure is mounting on President Emmerson Mnangagwa to hand over power to his deputy Constantino Chiwenga because, according to the fundamentals of the November 2017 coup that overthrew the late former President Robert Mugabe, he was supposed to serve one term and then hand over power to the former army general, some former Zanu-PF members have claimed.

However, Mnangagwa has indicated that he will run for the second term, with his allies pushing to declare him a life President, further widening the rift between the two. The latest fissures come as Mnangagwa has turned to several religious groups for support.

Disgruntled serving and ex-Zanu-PF members have in the past week amplified calls for Mnangagwa to step down, in what analysts described as a confirmation of the imploding factionalism in the second republic.

Interestingly, the ex-Zanu-PF members are using the same script applied in the build-up to Mugabe’s overthrow, which eventually led to Mnangagwa taking over on the back of the coup.

This script is also one that has torn apart Zanu-PF since the 1990s when staunch party cadres such as the late Edgar Tekere had to leave the party to form the Zimbabwe Unity Movement, following disgruntlement over Mugabe’s long stay in power.

A former Zanu-PF youth leader, Jim Kunaka, said Mnangagwa should honour the 2017 coup agreement and hand over power to Chiwenga.

“If they had agreed with General Chiwenga that he would give him five years to rule, what prompted him to change today, that he refuses to give him a chance? There is no need to go for congress,” Kunaka, who now represents the Zanu-PF Original, said yesterday.

“He (Mnangagwa) must honour what he agreed with Chiwenga that he would rule for a single term. He has already created parallel structures — Varakashi, Young Women for ED, Men BelievED … Those are now people who are loyal to him and not the organisation itself,” Kunaka added.

Former Zanu-PF youth commissar Godfrey Tsenengamu, who now leads the Front for Economic Emancipation in Zimbabwe party, on Wednesday warned that Mnangagwa would lose the 2023 poll.

Tsenengamu was fired from the ruling party following a “name and shame” sting operation meant to expose corrupt party
bigwigs.

“It will be disgraceful if you don’t change the way you are doing things. Come 2023, you won’t win if you are the candidate. Even if you will be contesting against me, you won’t win. Those near Mnangagwa, tell them that the fool said stop your bad ways. You are going nowhere. If we reach 2023 and if you are a candidate, you won’t win. The only thing you can do is make amends with some people,” he said.

He dismissed the Mnangagwa and Chiwenga rivalry claims as false and warned Kunaka and Tsenengamu that they were “playing with fire”.

“To even seek to invite our esteemed defence forces into these baseless claims is most unfortunate. As director of information, I remind the public to ignore the two embattled renegades and those behind them, for they are not members of Zanu-PF anymore.

“While it is expected that individuals can be excited, playing with fire is beyond one’s limits. It is one thing to criticise Mnangagwa as a Zanu-PF president and first secretary and a different thing altogether to seek the unconstitutional removal of His Excellency, Mnangagwa as President of Zimbabwe. To attempt the latter expressly or impliedly will be tantamount to asking for tragic consequences,” Mugwadi charged.

“These utterances confirm a couple of things, which are elite discohesion in the Zanu-PF faction ruling the country; limited progress in attempts to reunite Zanu-PF factions after the coup in 2017; and increasing call by young people in Zanu-PF and Zimbabwe in general for the old leaders to rest and allow young people the driving seat in line with the bulging youthful population of the country,” Saungweme said.

“But this is where it ends — mainly Zanu-PF power reconfiguration demands and factional fights. Very little from these Zanu-PF activists has to do with the need for democracy and total change in Zimbabwe.”

“There is no doubt that politics is heating up in Zanu-PF towards the elective congress. Trust in ED both as a national leader and as an electable person is at its lowest and other potential leaders, including Chiwenga, are possibly assessing their chances, hence the cropping up of all these statements and groups by Kunaka and Tsenengamu,” Mukundu said.

Mnangagwa has intensified his re-election campaign by engaging churches to gain political edge over his rivals as the race for the 2023 plebiscite hots up.

On Saturday, the Zanu-PF leader attended a church service at the Johanne Marange Apostolic Sect Passover service held in Mafararikwa at St Noah’s shrine, where he urged thousands of congregants in attendance to support him.

Last month, Mnangagwa joined worshippers of the African Apostolic Church led by Paul Mwazha in Chirumanzu, Midlands province, where he also solicited for support in the upcoming 2023 polls.

There are indications that the Zanu-PF leader is also expected to grace a Zion Christian Church conference at Defe in Gokwe next month.

The church is led by Nehemiah Mutendi. This is reminiscent of the late former President Robert Mugabe era, during which the ruling party would go to churches to garner support. At the Marange shrine, Mnangagwa heaped praises on the leaders, describing them as champions of peace.

“I was invited to come to this feast at the beginning of April. My friend, the late St Noah phoned and requested to see me at the State House and he came and we met. He prayed. I was shocked and saddened by his death,” he said .

“When I received the news of his death, I could not believe it because we had met the previous month. He was in the company of his son, the new high priest. Little did I know that he was introducing me to the new leader of the church

“Despite his youthfulness, high priest Nimrod has shown great leadership qualities as evidenced by how he has successfully organised this year’s Passover gathering. I have never addressed such a big crowd and I am at a loss of words.”

The Johanne Marange Apostolic sect has, however, been accused of condoning child marriages, which women’s rights activists are fighting to eradicate.

“Today is a big day, the High Priest St Nimrod is seated together with the Head of State,” Mangwana posted on Twitter.

“This government was prophesied in 1957, which is why the Holy Spirit is moving hand in hand with the leadership. Blessed are those who have witnessed this day, let’s us rejoice in it.”

Zanu-PF has, since under Mugabe’s rule, been accused of using religious leaders to control civil unrest amid socio-economic turmoil.

HARARE - New information emerging from Zanu-PF corridors indicates that the current factional fights in the ruling party are emanating from a 2017 power-sharing deal gone sour, source has gathered. Pressure is mounting on President Emmerson Mnangagwa to ha...
Share via
x
More Information