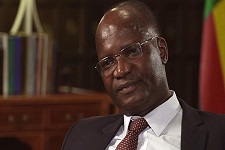 Mnangagwa proceeded to describe his boss as a rare gift to Zimbabwe, whose visionary leadership was unparralled, a steadfast thinker and an intellectual giant.

Mnangagwa was introducing Mugabe at State House at the launch of a book about the late former Tanzanian leader, Julius Nyerere, titled Julius Nyerere, Asante sana, Thank you, Mwalimu.

“This legendary figure is a rare gift to Zimbabwe,” Mnangagwa oozed. “He is a steadfast thinker with a clear vision of where the country should go. No amount of words can adequately describe what he has done for the country and continues to do. No amount of words can adequately capture what His Excellency, the Commander-in-Chief of the Zimbabwe Defence Forces, continues to do for this great nation.”

He described Mugabe as an honest leader who leads by example, a true son of the soil and a visionary leader who wants the best for Zimbabwe and Africa as a whole.

Mnangagwa said Mugabe — like the late founders of Pan-Africanism, Nyerere, and the late former Ghanaian President Kwame Nkrumah — lived a very simple life after being born to a humble villager, the late Mbuya Bona, Mugabe’s mother.

“His (Mugabe) life is characterised by simplicity like his middle name Gabriel implies,” Mnangagwa said.

The Vice-President said he was blessed and unlike other people, had the chance to greet and eat food prepared by Mbuya Bona, who gave birth to the legendary leader.
Zanu PF bigwigs have been falling over each other in bootlicking Mugabe and his wife, First Lady Grace, as the race to succeed the veteran leader, in power since attainment of Independence in 1980, reaches a crescendo.

Last year, the purges on party members accused of working with former Vice-President Joice Mujuru in an alleged plot to assassinate Mugabe created fertile ground for bootlicking, as members sang for the survival in the party.

Speaking at the event, Mugabe praised the late Nyerere for carrying the struggle for the whole continent.

Mugabe said Nyerere was a true Pan-Africanist who helped in the liberation of the whole continent and deserved great respect.

He said he had already proposed that an African Union peace and security building under construction in Ethiopia be named after Nyerere.

The book is a compilation of speeches by Nyerere over a period of 40 years.