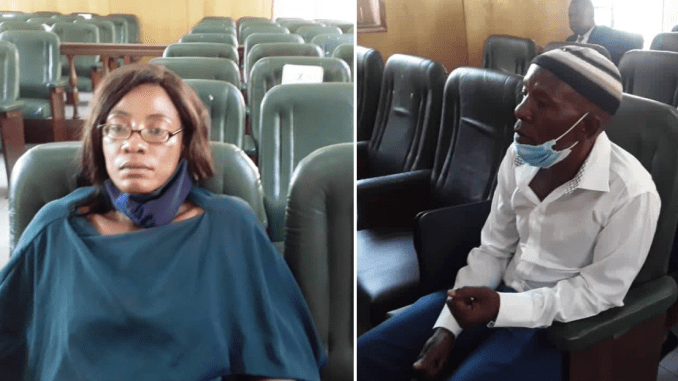 HARARE – Yolanda Kuvaoga, mother to the late video vixen and fitness trainer Michelle ‘Moana’ Amuli has appealed for assistance so that she can get back her granddaughter (Tyra) saying she fears for her safety under the custody of Moana’s father Ishmael Amuli.

Yolanda claims that her granddaughter was stolen from her by Mr Amuli with the help of Moan’s ex-husband who asked to take the daughter with him only to take her to Mr Amuli.

“I was staying with (Moana’ daughter) since Moana went to South Africa but after the burial, I gave her to the grandmother then took her again after 3 days. Tyra’s father then asked to take her so that she can see her relatives and I agreed.

“However, I had to attend another funeral so asked him (Tyra’s father) to stay with her for a while until I come back. But when I called to say she can now come back, the father refused and said will bring her when she now wants to come there.

“Only to find out that my granddaughter was taken to his grandfather(Mr Amuli) and I followed her. I did not like the state I found her in…

Moan’s mother has maintained that she was raped by Mr Amuli, adding that Moana was also raped by Amuli’s firstborn, one Alli.

She says she is scared that what happened to her and her daughter might happen to the granddaughter.

“I’m asking for help so that the Amuli’s can give me my granddaughter because a lot happened in my life. I was not in a relationship with Mr Amuli, he raped me. Michelle was also raped by Amuli’s firstborn son, Alli so I am scared and uncomfortable that Tyra is with them because I don’t want what happened to me and Michelle to happen to Tyra,” said Yolanda Kuvaoga.

Yolanda says it has been hard to come to terms with the Moana’s death.

“It’s been hard to accept. Death is not something you can get used to. I was looking forward to seeing my daughter (Moana) that Sunday because I had not seen her when she had left for South Africa

“I still cannot get it out of my mind. A lot has been happening and people have been hearing wrong information about me while others have been insulting me. Michelle’s father (Mr Amuli) has been soiling my name lying that I abandoned my daughter when she was 8 months old. We used to take turns to take care of Moana,” claimed Yolanda.

Adding that, “I was not happy with the burial because I wished to give my daughter a decent send-off. I did not refuse that the burial is conducted according to the Muslim religion but had just requested that my wishes be considered then after that it can be done following the Muslim rites but they refused. So I just feel like I buried my daughter just like an animal.”

She revealed all these details in a live interview with journalist Josey Mahachie.

Yolanda also said the family did not receive the help with funeral expenses that had been promised by Genius ‘Ginimbi’ Kadungure’s family and friends, claiming that Ginimbi’s family said they did not have money and only gave her US$500.

Moana’s death last month sparked a series of dramatic events which took centre stage as the parents battled each other to claim the body and overseeing the burial process.

The fight was taken to the courts which eventually ruled in favour of the deceased’s father.

Moana died last month in a tragic accident which also claimed the life of businessman and socialite Genius Kadungure.

Kadungure died on the scene after being rescued from the car but Moana and two others were burnt beyond recognition.

HARARE - Yolanda Kuvaoga, mother to the late video vixen and fitness trainer Michelle 'Moana' Amuli has appealed for assistance so that she can get back her granddaughter (Tyra) saying she fears for her safety under the custody of Moana's father Ishmael...
Share via
x
More Information