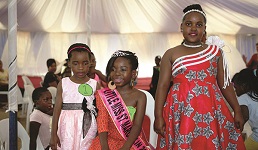 1.6kViews
0 Shares Share on Facebook Share on Twitter
ZMBABWE – Modelling agency, Zim Gossip, has started auditioning for models from as young as four years old in its bid to groom them from a very early age to ensure the success of models from Zimbabwe in future.

The youngsters undergoing training will battle for honours in the Little Mr and Miss Zimbabwe set for April next year in Harare.

Eight winners from the modelling competition will have a chance to go and represent Zimbabwe in the Little Mr and Miss World that is scheduled for October 2016 in Turkey.

“Little Mr and Miss Zimbabwe aims at grooming super models. It’s not a beauty pageant only but it also looks at talent and we want to nature that talent.

The competition is made up of four different categories with age ranges of four to six, seven to 12 and 3 to 16.

Miss Curvy Zimbabwe president Rose Chigwida, who is also part of the initiative, said they want to showcase the Zimbabwean culture to the world through these young talented models.

“We want to nature the young talent so that they will show what really Zimbabwe is the youngsters must appreciate their culture for example is they are asked to sing they should sing the Zimbabwean song in our own language,” she said.

The auditions for the Little Mr and Miss Zimbabwe are still open for those between 10 and 16 years.

“I would like to encourage parents to bring their children from the age of 10 to 16. This will enable the kids to develop self-confidence at an early age,” said Chigwida.