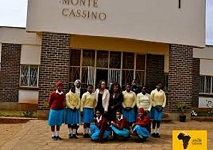 ZIMBABWE – Three female students at the highly acclaimed Monte Cassino Secondary School passed the Zimbabwe Schools Examination (Zimsec) 2015 “A” Levels with flying colours each attaining four As in the subjects they wrote at the Roman Catholic-run institution.

This also came as Primary and Secondary Education minister Lazarus Dokora said female candidates performed much better than their male counterparts, while addressing journalists on Thursday.

Monte Casino Girls High School principal, Sister Monica Muparura, who at first was not comfortable with publicising the schools’ performance, yesterday confirmed to NewsDay that the school attained a 100% “A” Level pass rate.

“Please do not rate schools in your story, we don’t like that, we (schools) have different backgrounds, it won’t be fair to other schools,” Muparura said.

But when pressed further by NewsDay, she said: “What I can say is that our students all passed, we had three students who each passed with four As.”

While Muparura refused to divulge the names of the three top students, the paper is reliably informed that one of the students is Tarisiro Moyo who attained As in the four subjects she wrote Maths, Physics, Chemistry and Biology, again becoming one of the best students at the girls-only school.

Moyo, whose parents are both senior lecturers at the University of Zimbabwe, hails from a family endowed with academic excellence.

“It runs in the family. Me, my wife, brothers and sisters are contributing a lot to the education system in Zimbabwe and across the border in South Africa,” said Torerai.

Tarisiro hit the headlines in the local media in 2014, as was one of the top “O” Level students, when her school in Mashonaland East Province produced the best Zimsec November 2013 “O” Level results, recording a 100% pass rate.

ZIMBABWE - Three female students at the highly acclaimed Monte Cassino Secondary School passed the Zimbabwe Schools Examination (Zimsec) 2015 “A” Levels with flying colours each attaining four As in the subjects they wrote at the Roman Catholic-run ins...
Share via
x
More Information