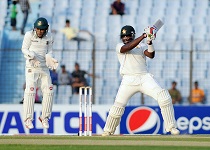 Zimbabwe A and Bangladesh A played out a high-scoring draw in the second unofficial Test in Harare, as the visitors won the two-match series 1-0.

Zimbabwe batted past tea on the fourth day to set a target of 278 for Bangladesh who faltered in their second innings, losing four quick wickets, before first-innings half-centurions Shuvagata Hom and Mosaddek Hossain ensured that the hosts did not have an opening into the game.

Zimbabwe posted 303 in their first innings after choosing to bat on the back of fifties from Hamilton Masakadza (50), Peter Moor (62) and wicketkeeper-batsman Joylord Gumbie (70). Bangladesh responded with a high first-innings score of their own, as they set up a 99-run lead through Tasamul Haque’s 102 and three fifties from middle-order batsmen.

Bangladesh sensed an opening after removing Masakadza early in the second innings but Moor and Brian Chari combined for a 229-run second-wicket stand as both batsmen struck tons to quash any hopes of a 2-0 series win for the visitors. Zimbabwe took the safety-first route and declared with the score at 376 for 5 before Bangladesh finished on 88 for 4 in 22 overs.