ZIMBABWE – MDC-T spokesperson Luke Tamborinyoka took to his Facebook social media site and announced what he imagined was something monumental that was about to happen.

He said: “In a few hours’ time, this Wednesday morning, we begin the cow-horn formation on zanu-pf and Robert Mugabe. True to our Congress resolutions of October 2014, we converge with other political players to showcase unity of purpose needed in this political moment. Operation Garira Neko. Come, let us reason together. (Isaiah 1, verse 18).”

If you had limited knowledge, it was a rather cryptic message, even if you got the general import from the spokesperson of Morgan Tsvangirai, who leads the opposition MDC-T.

He announced on the same platform saying: “NERA (National Electoral Reform Agenda) signing ceremony on course tomorrow Wednesday 2 December in Zimbabwe, I can reveal. This historic signing brings together over 10 political parties who will affix their signatures to fight zanu-pf domination and fight for reforms. That political parties like MDC-T, Zapu, People First, Mavambo and others could come to forge alliance is the biggest hope for a new Zimbabwe. Zimbabwe out there let’s celebrate and support our leaders.”

Indeed, that took place only it was not as dramatic as Tamborinyoka would have wished.

In fact, the event turned out to be what we usually refer to as a damp squib.

Tsvangirai only managed to gather around a handful of insignificant and unknown political parties that numbered up to 10 – if not slightly less.

There wasn’t a Welshman Ncube.

Joice Mujuru was not there (or her subalterns Rugare Gumbo and Didymus Mutasa).

Tendai Biti did not turn up neither did Simba Makoni nor Dumiso Dabengwa.

Even Margaret Dongo was not around.

And, oh, not even Lovemore Madhuku was there.

We rightly reported that, “another effort to forge an alliance by opposition political parties flopped on Wednesday as MDC-T leader Mr Morgan Tsvangira, cut a lone figure as few representatives of political parties mostly from the fringes of Zimbabwe’s politics attended”.

The reader may be aware that this same Tsvangirai has been frantically calling for the coalescence of opposition forces under him.

He imagines that he owns a tent, which he thinks is big enough for all the opposition outfits and individuals he hopes he can be the nucleus around which to coalesce.

He may have taken his credentials too far; that is that which he previously had and failed to utlise and has since exhausted.

Now Wednesday was another chance for him to rally the opposition forces, with the hope of forming an alliance against his sitting rival, President Mugabe and his zanu-pf.

You can bet that precious dollar that he will continue to.

And never mind what Obert Gutu says, who is a veritably shallow fellow as a spokesperson and as jingoistic as poor Luke Tamborinyoka.

Tsvangirai has failed to rally around opposition forces which is a very optimistic but often misdirected proposition.

But Gutu avers: “We are not at all struggling to form a coalition with other opposition political parties. As you know, the formation of a coalition is a process; not an event. It’s a marathon and not a sprint. Eleven political parties, including the MDC-T, signed the National Electoral Reform Agenda (NERA) document yesterday and indeed, that’s a very promising start.”

That is quite different from the cavalier optimism Luke showed us on Tuesday, isn’t it?

On Wednesday Luke’s heart must have sunk.

There was nothing earth- shaking about Tsvangirai and a group of nonentities coming together and signing an obscure document at a ceremony that even did not tickle the fancy of opposition media.

You must pity poor Morgan and his zealots.

Obert Gutu for one seemed chastened enough although his pride had to find a shell.

Explaining the poor turnout he said: “The MDC-T does not have a big brother attitude. Granted, we are the largest and most popular political party in Zimbabwe but then, that doesn’t necessarily mean that we look down upon other political parties. We are democrats to the bare bone.”

So much about being the largest and most popular party!

One would have thought a party of such vaunted status would do better and attract attention and political somebodies and institutions not briefcase political parties and other one-man outfits.

The reality that should sink in is that Tsvangirai’s past sell-by date is long gone as an opposition leader.

The fact that the other political institutions are unwilling to join him in his not-so-big tent – if at all he owns one – speaks to this basic truth.

There might be some personal and ego issues but the overarching issue is that there is just nothing to bind the opposition together and that glue is definitely not Morgan Tsvangirai.

Not even Joice Mujuru, if ever she decides to become a real opposition politician.

He is an opposition centre that cannot hold.

In fact, he is a polarising and insecure centre that has overseen the rapid splitting of the opposition so much so that even those who would generally stand to benefit from joining forces with Tsvangirai stay away.

It is really a contradiction.

Tsvangirai and N-ERA of failure

Which brings us back to the long-suffering Luke Tamborinyoka.

He must have been imagining his master Tsvangirai as some kind of Tshaka the Zulu that he was taught while at junior school.

That is where he heard of the cowhorn formation and all that jazz.

Unfortunately, Tsvangirai is no Tshaka, if we are to assume that the former was a genius.

Tsvangirai is a well-worn dullard whose legendary deficiency is a matter of record.

He cannot be trusted to run anything including his own personal affairs.

To expect him to run a big tent, even in the literal sense, which he imagines he can, is just too much to ask.

And we wonder what Tamborinyoka’s motivation of referring to Isaiah 1, verse 18 is?

It talks about the Lord exhorting sinners to come and settle matters with him so that he washes their scarlet sins snow white.

Come on, is this a kind of joke?

Surely, Tsvangirai is no god, he that is a scarlet sinner himself! 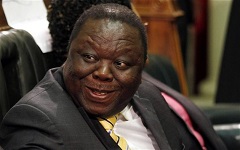 Morgan Tsvangirai and N-ERA of failure

ZIMBABWE - MDC-T spokesperson Luke Tamborinyoka took to his Facebook social media site and announced what he imagined was something monumental that was about to happen. He said: “In a few hours’ time, this Wednesday morning, we begin the cow-horn forma...
Share via
x
More Information
x