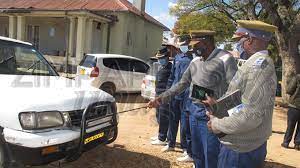 HARARE – Police have arrested 22 motorists for fitting their vehicles with dangerous LED light bars while another 194 border jumpers have been arrested.

So far Police have arrested 55 219 people throughout the country since the operation commenced in January 2021.  On Saturday police arrested 22 motorists across the country for fitting vehicles with dangerous bar headlights, while three other people were arrested for wildlife related crimes under the OperationThunder.

So far this year, police have impounded 14 000 unregistered vehicles, while more than 20 000 touts have been arrested countrywide after more errant people and drivers were accounted for last weekend.

This comes as authorities intensify operations against illegal activities.

Most of the touts were released after being fined, while the unregistered vehicles will only be released once they have been registered.

By last week, police raised nearly deposit fines totalled $32 million after the arrest and fining over 44 000 touts, owners of unregistered vehicles and cars fitted with dangerous bar headlights under an ongoing operation.

Among those that were arrested and fined were 328 people that were found with dangerous weapons.

Of the total arrested, 21 790 were touts, 13 855 unregistered vehicles, while 8 416 were motorists with cars that are fitted with illegal bar headlights.

In July, police warned that extended headlights mounted on vehicles, blamed for causing some fatal accidents, were illegal.

Through Statutory Instrument 129 of 2015, Government banned the mounting of additional headlights on motor vehicles.

The law states that those who want to make any modifications to their cars should first seek authority.

The additional LED light bars that some motorists fitted on their cars cannot be dipped, compromising the vision for other drivers.