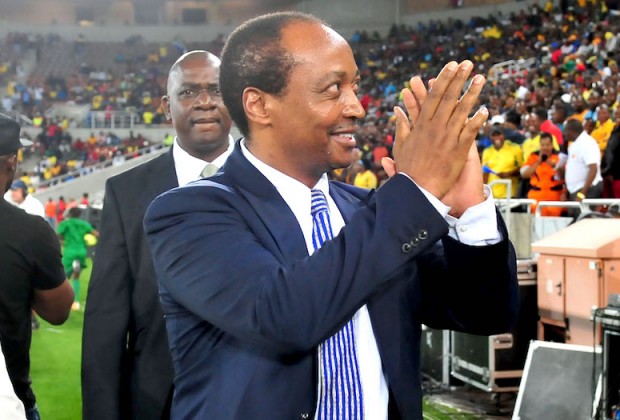 SOUTH AFRICA – Mamelodi Sundowns owner Patrice Motsepe said the title of President at the club will be ‘retired’ should he win the upcoming election to head the continent’s football governing body.

The South African businessman is in the race to become the next Caf President with the elections to be held in Morocco next month.

He said if he is to win this election, then his son, Tlhopie Motsepe will have to play a much significant role as the head of Sundowns, adding that his wife and other sons will also have roles to play during his absence from the internal affairs.

Motsepe was an audience during the launch of his 10-point plan to revive the Caf.

“If I’m honoured and privileged and elected I will have to step aside (at Sundowns). Because you can’t have a president who has to introduce all of these fundamental changes … and then I sit there and Sundowns are playing the Champions League final‚ and the referee makes funny decisions. And they say‚ ‘You see’.

“So I’ve got to step away. And so‚ in our culture my son (Tlhopie Motsepe) is going to be – you know‚ you don’t want to pre-empt the thing – but he’s going to be the new chairman. … And his mother will be there‚ and his brothers will be there. So the jersey of president will be retired until there’s a new president at Caf‚ in which case I will come back,” he said.

Motsepe said Dr Rejoice Simelani, executive director of Motsepe’s Ubuntu-Botho Investments will be there to back up Tlhopie Motsepe together with other key people involved in his business.

SOUTH AFRICA - Mamelodi Sundowns owner Patrice Motsepe said the title of President at the club will be 'retired' should he win the upcoming election to head the continent's football governing body. The South African businessman is in the race to become ...
Share via
x
More Information
x