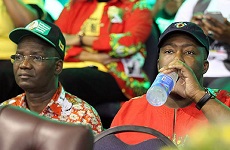 “Cdes, we were in Harare recently where the provincial executive resolved that Jonathan Moyo, who has defied the President, will not be allowed to attend the next Politburo meeting.

“Then two days ago, Cde Kasukuwere said he was organising party members to come to Harare to assault the war veterans who want to bar Moyo from attending the Politburo meeting. So they should both (Moyo and Kasukuwere) go,” said Cde Matemadanda.

He said war veterans had resolved that President Mugabe and the party should expel Cde Kasukuwere and Prof Moyo for fanning factionalism.

He said the two were also holding secret meetings with expelled party members in a bid to topple the First Secretary.

Cde Matemadanda said war veterans would not be intimidated by thugs organised by Cde Kasukuwere to obstruct their plan to petition President Mugabe to rein in the two members for causing serious divisions in the party.

He said war veterans were solidly behind Cde Christopher Mutsvangwa as chairman of the association and that they had tasked him to convey their resolution to President Mugabe that the two must go.

“War veterans have asked you (Cde Mutsvangwa) to go and tell President Mugabe that we will never desert the party. We are loyal to you and these people want to get rid of war veterans by peddling falsehoods.

“These people think they can create a rift between President Mugabe and Vice President Emmerson Mnangagwa. They want to create non-existent tiffs between war veterans and the President and his deputy so that they strategically position themselves to rule this country.

“They have dragged the police, intelligence and soldiers into their shenanigans and stupid ploys insisting on security sector reforms. They have already lined up people they want to put in certain positions in Government and party.”

Meanwhile Cde Kasukuwere has come under fire from senior party cadres after his remarks that the revolutionary party had no time to discuss the abuse of social media at its Politburo meetings.

Cde Kasukuwere, who is also Local Government, Public Works and National Housing Minister, told journalists last Friday the ruling party had more serious issues to discuss than what goes on on social media.

This was at variance with party spokesperson, Cde Simon Khaya-Moyo’s comments that the abuse of social media by party members was a cause for concern and that the issue would come up for discussion at the next Politburo meeting scheduled for Wednesday.

And yesterday Cde Khaya-Moyo stood his ground, saying his comments were consistent with what President Mugabe had said when he denounced abuse of social media by party cadres to attack each other when there were proper platforms in party structures.

“The President has spoken well and eloquently about abuse of social media and I am the party spokesperson. I am in line with what the President said,” said Cde Khaya-Moyo.

He said while the agenda of the Politburo was crafted by the secretary for administration, Cde Ignatious Chombo in consultation with the Presidency, he expected the issue of abuse of social media by senior party cadres to come up.

“I expect that subject, which has been in the media for the whole week, to be raised in the Politburo. People are free to bring it up.

What I have been saying throughout the week about the abuse of social media is merely echoing what the President has said. I am talking about the President who is the only centre of power and I am the official party spokesperson,” said Cde Khaya-Moyo.

Cde Matemadanda said President Mugabe had made it clear social media and hostile private media were not the correct platform to discuss party issues.

He said it was the duty of party cadres, particularly senior party members, to rally behind President Mugabe.

“It is surprising that the national political commissar, who should know better, chose to defy the President. He should be speaking the same language as the President. We are however happy that it has become clear to everyone the kind of people they are. It is now up to the President to make his own assessment from what Cde Kasukuwere has said and see if his objectives can be achieved with such people,” said Cde Matemadanda.

“Cde Khaya-Moyo is the official spokesperson and has spoken well about that but the national political commissar is saying something different. That is an internal contradiction.”

Addressing journalists last Friday, Cde Kasukuwere said Zanu-PF had no time to discuss social media issues in its Politburo meetings and accused the media of trying to set an agenda for the ruling party.

This came in the wake of frenzied tweeting by Higher and Tertiary Education, Science and Technology Development Minister Professor Jonathan Moyo, who has been attacking fellow Zanu-PF members on social media.