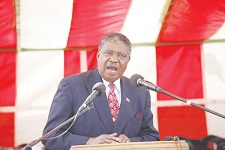 ZIMBABWE – Apart from their seemingly infinite capacity to throw up surprisingly entertaining performances, puppeteers have also mastered the art of remaining concealed in the background for as much time as is required to give the audience the impression that the puppet has independence of thought and movement.

However, as much as the puppet moves or dances, the reality is that behind the scenes, the master is always dictating where and how far the act can go. The independence is thus just a mirage.

In the mirthless circus of Zanu PF politics, President Robert Mugabe has proved time and again to be the puppeteer of unrivalled ability, controlling the movements of his acolytes and restraining those who seemed to forget that they are not their own bosses.

This is a lesson that vice-president Phelekezela Mphoko has fast learnt and adapted to. After a frenzied first two months in office, his words and deeds gave the impression of a man who sought to chart an independent path, but time has proved he is a willing court jester, ever ready to amuse his master.

He has morphed from being a populist politician not afraid to delve into controversial topics like the marginalisation of Matabeleland provinces, Gukurahundi massacres and devolution of power to the more conventional Zanu PF puppet on a string who sings Mugabe and his wife’s praises for his supper.

Having landed the second most powerful post in national politics in December ahead of the likes of the better known official in current local politics Simon Khaya Moyo, Naison Ndlovu and Kembo Mohadi, Mphoko was never going to be allowed to walk on his own road when he was brought in by Mugabe, having applied for the job.

In fact like the rest who owe their positions to Mugabe, he was always going to end up where he is right now — praise-singing and hanging onto First Lady Grace Mugabe’s coattails acting like a court jester — a clown or buffoon employed by royalty for entertainment.

These days Mphoko is part of the travelling troupe that accompanies “Zanu PF referee Grace” on her road-shows where she hurls invectives in the direction of real or perceived rivals in the race to succeed her husband.

As the opening act for the vituperative Grace show last week in Rushinga, Mphoko surprised many observers by saying it is proper for Zanu PF to salute the First Lady as “Her Excellency” placing on par with her elected husband.

“I want to correct a misconception once and for all. Vice-president Mnangagwa and I are just vice-presidents who must be addressed as Honourable.

However, the First Lady is as good as the President and must be addressed as Her Excellency,” he said, without any shame.

“We must correct these misguided perceptions that I am being belittled when I am asked to introduce the First Lady.

When I took oath as vice-president I swore to be loyal to President Mugabe and that does not end with him only but his wife and family. I am serving at the mercy of the President and his wife and so am bound to respect her.”

First Ladies the world over are not accorded the kind of honour Mphoko ascribed to Grace as they are private citizens who are not been elected into public office or whose positions are constitutionally enshrined.

These are things that Mphoko knows too well being a seasoned diplomat for about three decades, but to please the puppeteer and protect his position, he must act as an ignorant clown.

That he should bootlick Grace in this manner is testimony of the fact that however much the goat tries to pull away, he will only go as far as the tether set by his master allows him.

Mphoko appears to be at the end of his tether and Mugabe is now tugging his acolyte after his start to life as vice-president which was replete with uncharacteristic attempts push the envelop on controversial subjects as marginalisation of Matabeleland provinces, Gukurahundi and devolution of power. Mphoko was not always a praise-singer.

In fact he used to have his own Meet- the- People Tours where his desperation to carve out a solid support base and a constituency for himself meant that he could eschew the usual Zanu PF conventions of extolling Mugabe’s virtues and reiforcing his personality cult.

“Can you tell me why Bulawayo’s factories and industries have closed down,” Mphoko asked the crowd who thronged Zanu PF’s Davies Hall headquarters in Bulawayo’s Makokoba suburb in January, just a month into his appointment.

Dismissing the “it is sanctions and MDCs” Zanu PF mantra or pretext to shirk responsibility for failure, Mphoko blamed government through Zesa and Zinwa for depriving Bulawayo of electricity and water, both of which are critical for industrial production.

He took the rhetoric and grandstanding to the stratospheric levels by telling his audience that he would personally see to it that Zesa and Zinwa are kicked out of the city.

“Without water and without electricity we are only joking, there is no development that can take place. Bulawayo power station must come back to Bulawayo. It should not be run by Zesa. Zesa was not even there when it was constructed,” Mphoko said.

“Zesa must only be there for national programmes, but not in my home. Bulawayo is a standalone city like Harare. And don’t give our roads to Zinara; they must be given back to the Bulawayo City Council (BCC).”
“Those who pay rates must pay them to BCC which has its own departments for such things and not to Zinara which must concern itself only with national roads. There is no need to confuse things siyezwana bantu bakithi (do we understand each other my kith and kin).”

Taking his rhetoric to a new high, Mphoko’s voice soured above the din to deliver the coup de grace: “You people of Matabeleland must unite with those in Midlands or else you will continue to suffer the consequences of under-development.”

This talk of marginalisation, devolution along with his feverish attempt to exonerate himself from culpability in the Gukurahundi episode is the kind of stuff Mugabe usually does not brook from his subordinates.
With his hands up in the sky, Mphoko denied any involvement in the Gukurahundi massacres in which as many as 20 000 civilians were killed largely by security forces during their operations against dissidents in Matabeleland and the Midlands regions.

“There is a woman called Nomazulu Thatha based in the UK … She alleges that I joined CIO in 1980. I have killed no one. I repeat, no one was killed by these hands,” Mphoko told the Bulawayo crowd.

This all happened during a hectic January during which Mphoko finished with the parting shot, imploring Matabeleland’s people to “phone me and take me to task if I fail to deliver”.

But that was then.

The new reality is that he will not have any time to answer even if anyone took him up on this offer to call — the puppeteer is now pulling the strings and Mphoko has to hang onto the coat-tails of the First Lady for political survival.

ZIMBABWE - Apart from their seemingly infinite capacity to throw up surprisingly entertaining performances, puppeteers have also mastered the art of remaining concealed in the background for as much time as is required to give the audience the impression t...
Share via
x
More Information