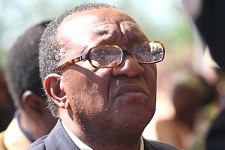 ZIMBABWE – A report by the Parliamentary Portfolio Committee on Public Accounts yesterday revealed the rot at the Grain Marketing Board (GMB).

Opposition MPs called on Agriculture minister Joseph Made to resign, accusing him of failing to rein in management at the parastatal.

The motion on the Public Accounts Committee report on GMB for 2011 to 2014 audit reports was introduced by its chairperson, Paurina Mpariwa, who said GMB had failed to maintain the stipulated strategic grain reserves levels of 500 000 metric tonnes.

It said the parastatal’s accounts were in shambles and yet it continuously failed to rectify issues raised by the Auditor-General for three years.

The committee report said during the periods under review, the GMB board downgraded maize totalling 61 396 metric tonnes, with a replacement value of $18 111 820, due to poor storage facilities, poor tarpaulins and delays in fumigation. “The Consumer Council of Zimbabwe advised that the maize could have fed 1 534 900 households of six people each for a period of one month,” the report read.

Seconder of the motion, Gutu North MP Ticharwa Madondo (Zanu PF) said the decision by the GMB board to launch a $30 million stockfeed plant was unwise.

“It would have been better if they had put the $30 million towards rehabilitation of silos,” he said.

Mabvuku-Tafara MP James Maridadi (MDC-T) said Made should fire the GMB board and management before he, himself, resigned.

“If there is anyone who should be furthest from the Agriculture ministry, it should be Made. GMB talks about the livelihoods of people and food security and yet it is in a mess. Parliament must bring Made to account for the mess at GMB, and after that, he should have the decency to go to Munhumutapa Building and resign and go to Rusape to become a farmer,” Maridadi said.

Bulawayo South MP, Eddie Cross (MDC-T) said South Africa and Zambia would not be able to supply Zimbabwe with maize this year due to drought.

“We will be forced to import maize from the United States or South America, and it requires 200 ships and five trains per day to bring the seven million tonnes of maize. The crisis is of a great magnitude because we have 750 000 metric tonnes storage capacity in our silos. If we have not been able to maintain them, it is criminal negligence,” he said.

Mazowe South MP Fortune Chasi (Zanu PF) said the GMB board was illegal, adding the law must take its course on those responsible for the rot.

Reflecting on the Aids pandemic in Zimbabwe

‘Breakfast With Mugabe,’ by Fraser Grace

Muslims have a right to build Schools, Universities and Hospitals in Zimbabwe – Sheikh Duwa

MPs call for Made resignation after GMB rot report

ZIMBABWE - A report by the Parliamentary Portfolio Committee on Public Accounts yesterday revealed the rot at the Grain Marketing Board (GMB).  Opposition MPs called on Agriculture minister Joseph Made to resign, accusing him of failing to rein in managem...
Share via
x
More Information
x