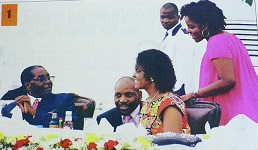 Their governing party counterparts, however, said there was nothing wrong in Mugabe celebrating his 92nd birthday party in the province, even as the dry season leaves farmers in financial peril and amid a serious food security threat.

Mugabe and his entourage will jet into Masvingo ahead of the $800 000 21st Movement celebrations.

The south-eastern province has received less than three-quarters of its average rainfall this season, according to the Meteorological Services Department, with the drought leaving people in many parts of the province struggling with water shortages, with affected farmers unable to harvest crops or feed livestock.

“It’s not a government thing but it’s a Zanu PF thing, but we all know they have never been sensitive to the plight of the people,” he said.

“The province is not awake to that issue. Maybe those who will be intimidated might be looking forward to this. This issue of politics has torn the country apart but what is encouraging is that the common denominator of poverty is beginning to unite us, so something will give.”

The senator said his heart bleeds for the dire situation obtaining in the province.

“If God does not intervene this year, people will starve to death,” Marawa warned.

“Already people are eating one meal a day. A bucket of mealie-meal is now costing $8 and many can’t afford it.”

“You can’t fail to celebrate Christmas even if the situation is bad in your home, you still celebrate,” Gutu Central Zanu PF MP Lovemore Matuke said.

“It’s something that is on the calendar. You can’t fail to celebrate your birthday; you don’t fail to do it regardless of circumstances.”

The Zanu PF chief whip, however, admitted that many in his constituency were living on the fringes.

“As a district, we are affected,” He said. “We can feel the disaster that has been brought by this drought. The government has started assisting with food aid but there is more that can be done.”

Gutu East Zanu PF legislator Berita Chikwama said Mugabe’s visit to Masvingo was a chance for the people in the province to brief the president on their problems.

“The community will be happy to see the president. It’s a visit and we accept and appreciate it. On the issue of hunger, he is trying. Social Welfare is chipping in. The government is assisting…..so we are trying.”

Gutu South Zanu PF MP Paul Chimedza did not want to be drawn into commenting on the ethics of Mugabe’s celebrations, but maintained that all was not well in the province.

“So even if it rains next year, people will still starve because the tools they use to farm will be gone,” he said, referring to the alarming number of cattle dying of hunger in the province.