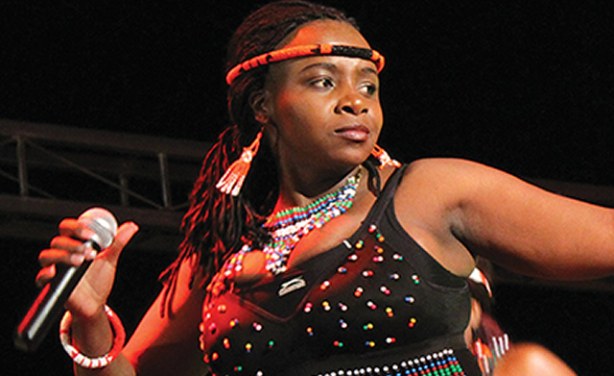 BULAWAYO – November 12, 2022, will go down in the history of the arts in Bulawayo and Zimbabwe, not only as a celebration of Sandra Ndebele’s 20-year career but as the day an album launch united the arts sector.

Sandra launched her 10th album at the ZITF Hall 3 in Bulawayo on Saturday night. The event was a culmination of her 20 years in the arts sector since 2002 when she released her first song, Mama.

The launch, since its announcement, was the talk of the country as it was to many music fans, a “must-attend event”.

It was therefore, not a surprise when people from far and wide braved the Saturday evening to attend the launch.

Sandra proved that she still has the pull that many artistes can only dream of as the launch which was streamed live on Facebook, was watched by thousands.

The high-powered Government delegation pledged its support for the artiste by buying the album for a combined total of over US$30 000.

After launching the album, an auction was initiated and Finance Minister Professor Mthuli Ncube bought the album for US$8 500, setting the tone for the night. He went on stage and was presented with the album by Sandra.

Thereafter, Deputy Minister Machakaire went on stage and whipped up the crowd, with the help of DJ Eugy, by singing a rendition of Lovemore Majaivana’s song UMoya Wami. He then said since he gave Alick Macheso US$10 000 for his album launch, for Sandra Ndebele he was pledging US$13 000. He received wild cheers from the crowd for this gesture.

Local music promoter Rice also pledged US$1 000 and the Young Women for Economical Development said they would buy the album for $500 while the organisation’s chairperson Tatenda Mavetera pledged US$1 000.

Fellow artistes that were there in support of the event that was hosted by Babongile Sikhonjwa and Zaza The Zazalicious One included Jeys Marabini and Novuyo Seagirl.

Guests and fans started trickling in as early as 5PM with most waiting patiently for the album launch to start.

The supporting acts, some of who were mentored by Sandra Ndebele gave a great account of themselves. The opening act, K Mimi seems to have a promising career if her performance is anything to go by. La Dee also brought some interest to the album launch.

The long hours of rehearsals seemed to have paid off for Sandy as her 20-member dance crew supported her very well. Sandy, a former member of Iyasa is from a performing arts background and it was telling through her well-choreographed presentation on stage.

But it should be mentioned that in some instances, it looked too crowded on stage and a bigger stage could have addressed the challenge.

Another thing besides playing backtracks, Sandra Ndebele had backing vocalists for all her songs and a live band for some of them.

The 10-track album is a mix Masala as it has a little bit of everything from Zimdancehall with Kadija, Afro-Pop with Platform One and Amapiano with Professor and Mr Brown. Some of the notable songs are Indaba Zabantu. Those in attendance had the opportunity to watch the track being performed live by the two artistes.

Another track to look out for is one with Mai TT titled Mas’bambaneni. It speaks about the importance of unity and has high energy. Sandra Ndebele sings parts in isiNdebele and Mai TT sings parts in Shona.

When Mai TT got on stage, the auditorium went into delirium and being the performer that she is, she knew how to work the stage and gelled well with Sandy.

Soulful musician X-Mile who is also featured on the album joined Sandy for the performance of their track, Ama Selfie which could also be a love tune likely to be popular with lovers.

The song Sarah Bartmaan with Professor, not as hard-hitting as Lizwile, did not get the crowd on its feet as anticipated. The song speaks on the plight of females being objectified sexually by society making them prone to abuse, something Sandra Ndebele has spoken about. To make up for the lukewarm reception that the song received, the duo performed their 2017 hit, Lizwile, which got the crowd on its feet and singing along. This was the first time they performed the track live on stage.

The grand finale was befitting to be reserved for Platform One as the group is close to Sandra Ndebele’s heart. The South African group performed at Sandra Ndebele’s wedding some 11 years ago and on Saturday night, they shared the stage to perform a collaborative track, Umuzi.

As the festive season is upon us, it could be one of the wedding songs that couples can dance to.

The message on Umuzi talks about the chores that married couples are supposed to do.

All in all, the message is clear on the album as it takes one on a journey from the beginning of Sandra Ndebele’s career to the present day.

Something that should not be forgotten is Sandra Ndebele’s outfits on stage. She had a trendy black number for her Amapiano tracks and went traditional on Umuzi.

Closing off the launch at midnight was a performance by DJ Liz and Crazy Dee.
Source – The Chronicle

BULAWAYO - November 12, 2022, will go down in the history of the arts in Bulawayo and Zimbabwe, not only as a celebration of Sandra Ndebele's 20-year career but as the day an album launch united the arts sector. Sandra launched her 10th album at the ZITF ...
Share via
x
More Information