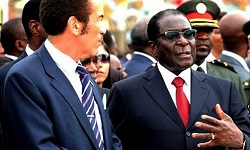 ZIMBABWE – PRESIDENT Robert Mugabe’s claims that Zimbabweans are not suffering because he gave them land is a sign of desperation and admission that he has lost depth on how to deal with the ever deteriorating situation in the country, analysts have said.Mugabe last week attacked the late General Solomon Mujuru for allegedly conspiring with academic and publisher Ibbo Mandaza and Mavambo/Dawn/Khusile leader Simba Makoni to topple him alleging that he was responsible for the suffering of many due to his socialist views.

“But what is it that the people are suffering from? Isn’t we gave them land?” Mugabe asked during a Zanu PF Women’s league meeting.

But political analyst and University of Zimbabwe political science lecturer Eldred Masunungure said Mugabe’s utterances were a subtle admission that people were suffering, but his government had no immediate solution.

Masunungure said the utterances bore a hidden sense of powerlessness that he cannot do anything to resolve the country’s free falling economy, but at the same time, does not want to shoulder the blame. Rather, Masunungure said, Mugabe wanted the people to blame themselves for failing to utilise the land he gave them to improve their lives.

“He (Mugabe) is pleading with Zimbabweans to absolve him on the problems the country is facing,” Masunungure said.

“He is saying; I am not guilty. I have done my part. I gave you land, so what else do you want from me? Take it from there; it is the foundation for prosperity.
The President is admitting to the people’s suffering, but the fatalism is buried deep in his statement. He is saying I am really powerless beyond giving you the land.”

Masunungure said Mugabe knew the magnitude of the people’s suffering, but indirectly wanted the people to blame themselves.

“It is part of the defensive posture of Zanu PF. They will always find enemies from without than from within. Recently, they said they will address the economy after the return of Mbuya Nehanda’s skull from Britain. But now, it is no longer the skulls nor the sanctions, it’s the people themselves.”

The country is facing a serious deflation, with companies closing down while thousands of workers lost their jobs.

Political analyst Alexander Rusero said Mugabe’s utterances were a clear manifestation of desperation from the 91-year leader struggling to contain infighting in the Zanu PF party.

“The whole political pressure is piling on the economy and he does not want to stomach blame. He is always looking for scapegoats,” he said.

Human rights researcher Dewa Mavhinga said: “I do not agree with Mugabe on that, it is obvious that Zimbabweans are suffering in the extreme, and anyone who says otherwise is being insincere, aloof, and utterly disconnected from the reality that people live daily.”

ZIMBABWE - PRESIDENT Robert Mugabe’s claims that Zimbabweans are not suffering because he gave them land is a sign of desperation and admission that he has lost depth on how to deal with the ever deteriorating situation in the country, analysts have said...
Share via
x
More Information
x