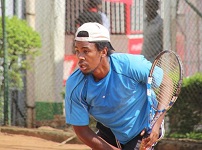 ZIMBABWE – Duncan Mugabe stamped his mark as the one of the country’s most prolific players after he bagged his third Uganda Tennis Open title at the weekend.

The top seed used 73 minutes to beat friendly foe David Oringa in straight sets 6-4, 6-2 and win the men’s singles final at Centre Court, Lugogo on a cloudy Saturday afternoon. “I am happy,” with beads of sweat littering his face, a thrilled Mugabe said after adding this year’s title to his 2010 and 2011 titles. I was a bit nervous in the first set but I put in so much effort. We both committed many mistakes but I held on and met the expectations of my fans, friends and family,” the 22-year-old said.

Oringa, champion in 2012, was equally pleased despite the loss. “It was a good even though my body didn’t deliver,” the lanky Oringa said. “I didn’t practice much but I am glad I made it to the final.”

Both Mugabe and Oringa were painfully eliminated by Rwandan pair of eventual winner Jean Claude Gasigwa (RIP) and Dieudonne Habiyambere respectively at the semifinal stage the last time the Open was held in 2013. This time, the event climaxed with a first all-Ugandan final in 24 years. Mugabe eliminated legendary John Oduke’s son, Simon Ayella 6-2, 6-1 in the first semifinal on Friday while Oringa struggled to match Kenyan Ibrahim Kibet’s serve in the second semifinal to win 4-6, 7-5, 6-2. This match’s third set was halted because of a heavy downpour and had to be completed on Saturday morning. Oringa admitted that the rescheduled set affected his preparations for the final. “Such a delay affects you mentally. Duncan got done yesterday (Friday) and he was more prepared,” he said.

Oringa, who complained of pain in the left hip, pocketed Shs1.35m while Mugabe took home a total Shs3.2m in prize money.

Together with Shamim Mayanja, Mugabe lost the mixed doubles final to Kenyan pair of Kibet and Shufaa Changawa.

ZIMBABWE - Duncan Mugabe stamped his mark as the one of the country's most prolific players after he bagged his third Uganda Tennis Open title at the weekend. The top seed used 73 minutes to beat friendly foe David Oringa in straight sets 6-4, 6-2 and win...
Share via
x
More Information
x