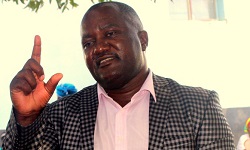 ZIMBABWE – Over 5 000 litres of fuel donated for President Robert Mugabe’s 92nd birthday celebrations set to be held on Saturday at the Great Zimbabwe Monuments has been stolen by senior Zanu PF officials.

“Fuel that was donated for the president’s bash was stolen by people who want to de-campaign him. We have evidence because they signed for the fuel at the garage administering it,” he said.

“Our fuel for the function cannot be used for other things. It was donated and what image will we give to the people who donated?

“We do not want people who abuse our donations. We need to be accountable so that next time, people who donate will know that their pledges were not abused so that they will donate again.”

Ndaarombe added: “We have got a challenge of people personalising the party. Zanu PF is not a briefcase organisation.”

However, Chadzamira dismissed the allegations.

“I think whoever said that is mad,” he said, without elaborating.

At a provincial coordinating committee meeting (PCC) last Tuesday, Chadzamira said the province had raised everything needed for the bash.

“We are ready to roll and we have all that is needed for the successful hosting of the bash. We raised enough fuel, food and cash amounting to $35 000,” he said.

Acting chairperson of the faction linked to First Lady Grace Mugabe, Amasa Nenjani told yesterday’s PCC meeting that they did not recognise Chadzamira as he had been suspended by commisar Saviour Kasukuwere.
“I do not know about the last meeting as the acting chair. Whatever came out of it, I do not recognise it,” he said.

Jeppy Jaboon, who was counter-suspended at the previous meeting by the Chadzamira faction loyal to embattled Vice-President Emmerson Mnangagwa, said their camp was the legitimate provincial executive.

“We are the real provincial executive representing Masvingo. We distance ourselves from people who insulted the first lady,” he said.

“If you insult the First Lady, you have insulted the president. We cannot celebrate that. They have got a sinister agenda.”

“As Masvingo provincial coordinating committee, we do not recognise them. We will deal with them after the president’s birthday celebrations. Any PCC meeting should be called by Nenjani.”

ZIMBABWE - Over 5 000 litres of fuel donated for President Robert Mugabe’s 92nd birthday celebrations set to be held on Saturday at the Great Zimbabwe Monuments has been stolen by senior Zanu PF officials. Mugabe turns 92 today. Speaking at a provincial ...
Share via
x
More Information
x