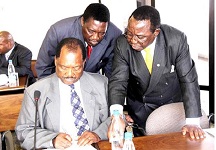 Gumbo told a Southern African Economic and Political Series (Sapes) Trust discussion that Mugabe’s desire to rule until death was influenced by his young wife.

Mugabe married Grace (50) in 1996 following the death of his first wife Sally due to a kidney ailment.

In the past few years, Grace has been playing a prominent role in the fluid battle to succeed Zimbabwe’s only leader since independence in 1980.

“Mugabe has consistently claimed the party would implode if he left, but the reality is that he wanted to develop a Gushungo dynasty,” Gumbo said.

“He wants his relatives, including his wife, to take over. When he married Grace, some of us realised disaster had befallen the country because we knew she would not allow him to leave power.”

He was fired from the ruling party in 2014 after being accused of being part of a rebellion against Mugabe together with Mujuru.

Gumbo said he wanted to apologise to Zimbabweans for his role in jettisoning Mugabe into the leadership of the liberation movement during the struggle.

“Our mistake was that we chose Mugabe against the advice given by [former Mozambican leader] Samora Machel,” he said.

“I had stayed with him [Mugabe] at the then Salisbury Maximum Security Prison.

“I pretended to know Mugabe more than the others and I argued he was the right man for the job.

“I must apologise for this. We wrote letters that the guerrillas must support him and he was brilliant.

“But some were quite reluctant and the Mozambicans had already put him in jail. It was our biggest mistake.”

Gumbo said he had realised his mistake and sought to warn “fellow citizens” in a statement in 1980, “but nobody listened because a lot of us were consumed by the euphoria of independence”.

“I feel vindicated now. All that Mugabe wanted was nothing but power and we did not realise it,” he said.

“In 1980, I said ‘guys we are dealing with a monster and we will suffer’ but nobody listened. Mugabe’s guiding principle is amassing power.”

Speaking at the same occasion, People’s Democratic Party (PDP) leader Tendai Biti warned of a “physical confrontation and implosion” as the internal fights in Zanu PF reach tipping point.
He said a “Rwanda type social decay is too apparent”.

“A physical confrontation is inevitable and the vicious assault on war veterans is the beginning of the manifestation of the contradictory power fighting for the retention of the status quo. This is a by-product of exhausted nationalism,” Biti said. “We have metaphors of hate and delegitimation.”

The former Finance minister said the succession battle in Zanu PF was a manifestation of failure to transform by the ruling elite.

“The struggle for succession is not an individual struggle, but one of ensuring the continuation of the status quo,” he said.

“It is a contestation between those of us who want to see organic democratisation and the old order — which is fighting to reproduce itself beyond its demographic limitations.

“We allowed a group of people to get their hands on the state and now they want to see the continuation of the state of corruption, looting and the state of eating.

“The archbishop of this group is Mugabe; he has guaranteed the emasculation of the state, its institutions and the citizens.

“But they know he is on his way out and this group is desperate for survival, at the same time finding a new deacon, a new headmaster, a new Pope,” Biti added.

The battle to succeed Mugabe took a new dimension on February 12 when Grace launched a scathing attack on Vice-President Emmerson Mnangagwa, accusing him of plotting against her husband.

A decade of turmoil

Wear their regalia, but dump them: Tsvangirai