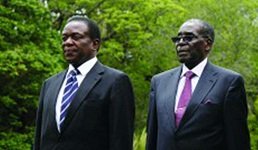 Mutsvangwa, who sits in the politburo as deputy secretary for war veterans, was accused of undermining First Lady Grace Mugabe.

The Mutsvangwas are believed to be staunch supporters of Mnangagwa’s faction, which is locked in a fierce succession battle against the G40, which Grace is said to belong to.

Yesterday’s suspensions came as Mutsvangwa had reportedly met Mugabe and invited him to attend a war veterans meeting scheduled for next week and there were also reports relations between the two had improved following the President’s public censure of the War Veterans’ minister.

The axed youth leaders had formed their own advocacy group, Save Zanu PF Campaign, to counter activities of the G40 faction.
Seven other leaders of Zanu PF affiliate organisations that include Tonderai Chidawa (Zicosu), Norest Makururu (Youth in Mining), Collen Machingura (Youth in Farming), leader of the National Youth Services among others, were also expelled from the party.

“I will start with one of Mashonaland West (and) Christopher Mutsvangwa has been suspended for three years and, therefore, must not hold any position in the party for the same period but remains, of course, a member of the party and a Member of Parliament.

“Midlands’ Espinah Nhari has also lost her position in the women’s league as secretary for administration and has also been suspended for three years.

“Monica Mutsvangwa has also lost her position in the women’s league and has also been suspended for three years.”

Four others Tendai Makunde, Fellix Mona, a W Masvaire and a G Katsande were reprimanded and pardoned.

The affected officials have been very vocal in attacking the G40 faction, and openly challenging Mugabe to rein in his wife Grace, whom they described as divisive.

The provincial youth chairpersons at one time left their posts en-masse accusing national commissar Saviour Kasukuwere of trying to arm twist them in their operations.

Mugabe recently reprimanded Mutsvangwa in an impromptu state of nation address before opening floodgates for further purging at his birthday bash in Masvingo, where he chided Mnangagwa’s faction.

The faction is accused of trying to topple Mugabe.

EU sanctions against Mugabe and his ‘gang’ to stay