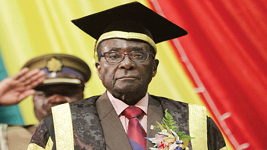 ZIMBABWE – President Robert Mugabe’s nephew and indigenisation minister last week boasted that the Harare administration would not take lectures on how to right the country’s long struggling economy.

Patrick Zhuwao said this was because the 91-year-old leader is a British-trained economist.

My boss has a Master’s degree in economics from the London School of Economics (LSE), Zhuwao told an indigenisation conference he organised in the capital.

He added: So, don’t think you can lecture us about economics, we understand it.

However, LSE has denied the Zimbabwean leader studied with the prestigious UK institution, according to the Voice of America (VOA).

We have searched our records carefully and can find no record of Robert Mugabe having been awarded any degree from the London School of Economics and political Science, a University spokesperson said in a brief statement.

President Mugabe may hold an economics degree from another London Institution, but certainly not LSE.

Mugabe graduated with a Bachelor of Arts degree from South Africa’s Fort Hare in 1951, subsequently earning several other degrees through distance learning mostly with the University of London External Programme.

The Zanu PF leader is blamed for overseeing the collapse of what was one of Africa’s most-promising economies when he took over at independence in 1980.

Critics say Mugabe’s failure to stem corruption in his administration has crippled the country along with controversial policies such as his land reforms as well as forcing foreign companies to cede majority shareholdings to black Zimbabweans.

Millions of Zimbabweans have left the country to escape the hardships while many of those who remain have resorted to vending in order to survive.

The government remains confident that its ZimAsset economic blueprint will help arrest the slide, backed by financial support and investment from friendly countries such as China and Russia.

Opposition parties are however not convinced, with former finance minister Tendai Biti calling on Mugabe to step down and allow a transitional authority to take over in the interim.

ZIMBABWE - President Robert Mugabe's nephew and indigenisation minister last week boasted that the Harare administration would not take lectures on how to right the country's long struggling economy. Patrick Zhuwao said this was because the 91-year-old l...
Share via
x
More Information
x