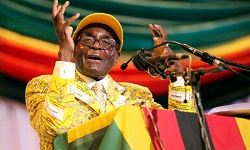 ZIMBABWE – President Robert Mugabe seems to be enjoying the Zanu PF fights currently underway as they will strengthen his position with factions hammering each other, analysts have said.

This follows the relentless bare-knuckle social media fights involving senior party officials a week after Mugabe ordered a truce and urged warring parties to use party channels to air their grievances.

Political analyst Ibbo Mandaza said Mugabe seemed to be enjoying the fights as his attack on such last week upon arrival from Ethiopia was not convincing.

“He is enjoying it. He has always enjoyed pitting them against each other. That statement of his was tepid. [Presidential spokesperson George] Charamba expected that he [Mugabe] would spit fire against (Jonathan) Moyo and he took a neutral position,” Mandaza said.

He said the escalation of public fights among Zanu PF officials even after Mugabe’s order for them to stop was clear indication of defiance.

“He has lost control. He left the succession issue too late and I don’t know whether he will be able to control it now,” Mandaza said.

Another analyst, Alexander Rusero, said it was possible Mugabe was enjoying the fights by playing a balancing act on the two factions.

“It is natural for Mugabe to try to be a balancing force. When the First Lady [Grace Mugabe] started her rallies, it appeared as if Mugabe had a soft spot for G40. They then got carried away, but now, I think it’s time up for that faction and it’s time to prop up another faction,” Rusero said.

“As it stands, it’s a sign that either the centre no longer holds or the people no longer respect that centre.”

Blessing Vava also said: “It is unprecedented in the history of the party that politburo members, let alone Cabinet ministers, openly castigate each other in public like what we are witnessing. A clear indication that Mugabe has lost that grip he used to have. He no longer commands that respect,” he said.

Another analyst Ernest Mudzengi said though it was likely that Zanu PF members were defying Mugabe, the clear picture would only come out after tomorrow’s politburo meeting.

Takura Zhangazha, another analyst, said: “They are waiting for the outcome of the politburo meeting and think things will be brought to finality. They are playing a waiting game and anticipate whatever decision will be on their side and were not in the wrong.”

ZIMBABWE - President Robert Mugabe seems to be enjoying the Zanu PF fights currently underway as they will strengthen his position with factions hammering each other, analysts have said. This follows the relentless bare-knuckle social media fights involvin...
Share via
x
More Information