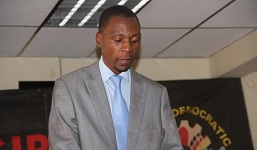 ZIMBABWE – In the middle of a debilitating crisis that has brought the country to its knees, President Robert Mugabe today dismally failed to rise to the occasion and presented an uncharacteristically terse speech that did not address the monumental challenges we face as a nation.

So out of touch is the Head of State to the reality on the ground that he had the audacity, even in the middle of this national collapse, to proclaim with a straight face that the economy is registering “modest growth.”

This man must certainly be living in another planet!

First, Mugabe gave the nation the usual rhetoric that his government is committed to job creation, promising that it will create jobs through value addition, beneficiation and infrastructure development, among other high-sounding initiatives which we have all heard before.

He dismally failed to articulate the interventions his government will make to improve agricultural production and to deal with policies such as indigenization which, while appearing to be people-oriented, have not spurred the country towards food security, economic growth and prosperity.

The promises he made today are the same promises made two years ago when he promised us he would create two million jobs. Nothing has changed and the nation knows that once again today, Mugabe was taking them up the garden path by repeating the same promises which have not been delivered half-way into his term.

Mugabe failed to pronounce himself on two key issues that Zimbabweans thought he would address today. These are the disappearance of Itai Dzamara and the non-implementation of the national Constitution, made and endorsed by Zimbabweans in their millions in a referendum.

That Mugabe failed to pronounce himself on these issues means he does not consider them important. The disappearance of Dzamara, the issue of the security of the citizen, the commitment to the implementation of the Constitution and the respect of human rights are matters the nation expected Mugabe to address today .

Mugabe told the nation that Zim-Asset, the blueprint his government has bandied about as a panacea to the national crisis, requires huge capital injection but did not tell us where his government will get the billions of dollars needed to enable the high-sounding promises of his government to come to fruition.

Mugabe ended his speech—-short on both content and substance–by shedding crocodile tears and pretending to commiserate with the 22 000 workers who have lost their jobs since the Supreme Court ruling of 17 July, 2015.

It was lost on him that the nation is aware that most of the companies that have taken advantage of that ruling are State-linked companies such as Air Zimbabwe, Zimpapers, ZBC, Civil Aviation Authority of Zimbabwe, GMB and other parastatals.

As widely expected, Mugabe failed to rise to the occasion. The crisis is bigger than the capacity of him and his government and he failed to take advantage of this day to announce to the nation the much-awaited news that he is retiring.

Once again, this was vintage Mugabe—long on rhetoric, short on substance.

Mugabe fails to rise to the occasion

ZIMBABWE - In the middle of a debilitating crisis that has brought the country to its knees, President Robert Mugabe today dismally failed to rise to the occasion and presented an uncharacteristically terse speech that did not address the monumental challe...
Share via
x
More Information
x