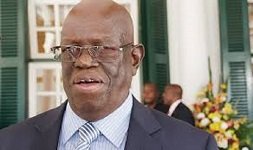 Dube was sworn in as substantive Minister at State house on Saturday afternoon.

Mutsvangwa was Thursday suspended for three years as Zanu PF deputy secretary for war veterans together with his wife, Monica and some nine party youth leaders.

The former Zimbabwe ambassador to China is being accused of gross indiscipline and of “undermining” First Lady Grace Mugabe.

After his suspension following Thursday’s politburo meeting, Mutsvangwa came guns blazing, declaring he was ready to be fired from his government post.

The sitting Zanu PF Norton MP, said after his “bitter” experience in China, he now has a general loathing for assignments that solely depended on an individual’s discretion.

“I neither care for that politburo post, nor indeed for the ministerial appointment,” Mutsvangwa told the media on Friday.

“So Norton constituency, yes; war veterans’ chairmanship, yes; politburo and Cabinet appointments – I don’t’ really care. In fact, two days ago I asked His Excellency for the honour of dismissing me because I only came in to save the revolutionary ethos and not to be served.”

Mutsvangwa, ironically a fierce Mugabe defender, has been skating on thin ice since he organised an abortive “extra ordinary” war veterans’ meeting last month which was violently broken by police.

Mugabe later came out on national TV accusing Mutsvangwa of going around his leadership to call for an unsanctioned meeting.

Mutsvangwa had called for a crisis meeting following his ouster as war veterans national chairman by a group loyal to the First Lady, Grace, who is widely believed to be firming up for presidency.

Mugabe was angry that Mutsvangwa had the temerity to call for the abortive meeting without even informing him as war veterans’ patron.

“For him to have called a meeting about which we knew nothing, in circumstances in which he had not clearly sought permission from the authorities, in violation therefore of the law, he being a minister, he cannot at the end of it all after the law and order officers had taken action against the meeting and the war veterans complain that they were ill-treated,” Mugabe said then, in a televised state of the nation address.

“He must bear the responsibility to have invited the war veterans in the name of the president telling them that the president would want to address them when in fact the president did not know about it, his invitation of them is to disabuse his authority as minister in the gravest way possible.”

Mutsvangwa’s woes can be attributed to his links with Team Lacoste, a Zanu PF faction led by Vice President Emmerson Mnangagwa.

The faction is fighting for Zanu PF control against the so-called Generation 40, which is rooting for Grace to succeed her husband.

Re-engagement Efforts A Waste If We Don’t Reform: Mliswa

After the Elections – What Will Mugabe Do Now?