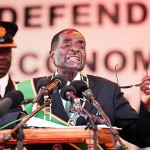 ZIMBABWE – Sports Minister, Andrew Langa has been sacked and promptly replaced by Makhosini Hlongwane  who was a Minister Without Portfolio.

Langa had survived the mass culling of Joice Mujuru loyalists but the heat had been turned on in recent weeks as factionalism intensified within Zanu PF. First Lady Grace Mugabe is said to have finally pulled the trigger on Langa.

The Chief Secretary to the President and Cabinet, Dr Misheck Sibanda, announced the appointment today of Hlongwane to the new post by  ailing President Robert Mugabe.