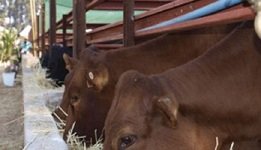 ZIMBABWE – President Robert Mugabe has honoured his pledge of 300 herd of cattle he made to the African Union Foundation last year, with the AU Commission deputy chairperson Erastus Mwencha arriving in the country yesterday to receive the cattle. The President, who was the AU and Sadc chairman when he made the pledge in June last year, made the move as a way of dissuading Africa from over reliance on external partners whose donations come with strings attached.

Speaking after meeting President Mugabe at State House, Mwencha said the cattle contribution would go a long way in capacitating the Foundation.

“I’m here for very good news,” he said. “His Excellency the President made a donation of some 300 cattle which will be a contribution to support our programmes including, for instance, building our health capacity and also strengthening our education for the continent.”

The African Union Foundation is a brainchild of African Heads of State and Government and was created for the purposes of collaborating with the private sector, philanthropists, individuals, and the diaspora to solicit donations and seek voluntary contributions towards the financing of Africa’s development priorities in pursuit of agenda 2063.

Mwencha said they were yet to make a decision on whether to sell the cattle or “get a place to keep them so that they multiply.” President Mugabe, who has repeatedly called on African countries to depend on themselves, said he hoped the donation would “keep the foundation going”.

“I’m happy that the gift we offered to the AU is at last received by the beneficiary,” he said. “I just decided that we make a gift in kind, it just struck me that no-one had ever thought of a gift by way of cattle to the AU and since we’re cattle people why shouldn’t we also make a gift to the AU in cattle form?

“So we’re very happy to make such a contribution, it (AU) is our organisation. And we hope the cattle, as will be decided now by the AU, will play some part in establishing the foundation, making the foundation keep going.”

Mwencha is expected to go and see the cattle at Vuka Farm in Karoi today.

Mugabe hands over 300 cattle to AU

ZIMBABWE - President Robert Mugabe has honoured his pledge of 300 herd of cattle he made to the African Union Foundation last year, with the AU Commission deputy chairperson Erastus Mwencha arriving in the country yesterday to receive the cattle. The Pre...
Share via
x
More Information
x