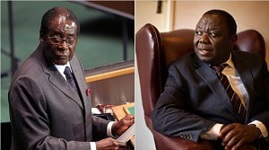 ZIMBABWE – The leader of Zimbabwe’s opposition Movement for Democratic Change Morgan Tsvangirai has warned that Harare is on the edge of the precipice as President Robert Mugabe is losing control of his party and nation.

In an exclusive interview with VOA Studio 7 for Zimbabwe, Tsvangirai said the factional fights in Mr. Mugabe’s party are a cause for serious concern for a country that has receded into deflation and has three million people who are food insecure and unemployment estimated to be hovering around 90%.

“It’s not so much the concern about succession, it has nothing to do with that, but it has assumed such acrimonious levels that the center is not holding. You cannot be fighting while Rome is burning”

Zanu-PF officials angling to succeed President Robert Mugabe, who turns 92 next week, are reportedly at each other’s throats along factional lines.

Turning to opposition politics, Tsvangirai said he is not concerned by remarks by former Vice President Joice Mujuru who registered her party Zimbabwe People First-last week and announced that MDC supporters were allegedly defecting to her party.

“Anyone can join a party of their choice. It’s not a claim of victory if you have a few members from the opposition joining you. For us we have a solid base and we wish her well joining the political fray, welcome to the opposition politics in Zimbabwe and let’s hope that she will realize that what she was part of, has caused this country to be where it is,” said Tsvangirai.

Tsvangirai though did not rule out forming an opposition coalition to challenge President Mugabe who will be 94 when the country votes to elect a new leader in 2018.

The Zimbabwe Republic Police on Thursday used baton sticks and teargas to disperse war veterans, who had gathered near the Zanu PF headquarters and the City Sports Center, to express their solidarity with under fire Vice President Emmerson Mnangagwa being accused by some members of the ruling party of allegedly trying to topple President Mugabe.

Police blocked the war veterans’ indaba, which was initially supposed to be held at the Zanu PF headquarters and then shifted to the City Sports Center after ruling party officials stopped them from entering the party premises.

The livid members of the Zimbabwe National Liberation War Veterans Association later grouped at an open space near the Harare Agricultural Show before the police descended on them with baton sticks and teargas.

Some of the war veterans were reportedly injured in the running battles with the police. Police declined to comment on the issue.

Karen Nehanda, one of the war vets who spoke to Studio 7 said, she was shocked by the heavy handedness of the police.

“So when you say down with them (war veterans) who are you? Are you (former Rhodesian prime minister Ian) Smith, are you (former U.S President George) Bush? Who are you? Why are you saying down with us? Don’t let this hooligans (Zanu PF political commissar Saviour Kasukuwere) treat us like this. Look at what he has done for us. Sjamboks, teargas when we just came to talk about our country. No we can’t have this.”

She said the war veterans had only gathered to discuss issues affecting them and find out why some Zanu PF members were denouncing them.

Nehanda said the brutal attack by the police and the blocking of their rally resembled the days of the colonial Ian Douglas Smith regime when police used to stop black people from holding meetings.

“I cannot describe what happened today. It brings us memories of the days when Smith wouldn’t let our nationalists meet and organise or strategise. People ended up going to Mozambique and Zambia because they weren’t allowed to have free meetings, to have freedom of speech and discuss things for the construction of their country. What makes them stop us from meeting? We feel like we are still in the Smith government or some American government.”

Zimbabwean war veterans who had gathered to demonstrate against a faction within the ruling Zanu PF party, reportedly led by Vice President Emmerson Mnangagwa, vent their anger after they were dispersed by police using tear gas and water cannons.

“We fought for this country. We are people and we do not know how they feel and even how the world feels when it hears that we were simply beaten for desiring to have a meeting.”

The war veterans complained that the police had told them that they were not able to provide manpower to monitor their meeting resulting in them being stopped from holding their intended meeting.

War Veterans Minister Christopher Mutsvangwa, who was recently given a vote of no confidence by another war vet group for allegedly supporting beleaguered Vice President Mnangagwa, convened a press conference in Harare soon after the running battles with the police and expressed displeasure over the way the police are treating the group.

“I am addressing you with a heavy heart which stems from the events of this morning that the ZRP found itself resorting to heavy handedness violence against selected representatives of our association.”

He said they want to engage the patron of the war veterans President Mugabe on what is going on in the ruling party.

“This is a monstrosity bordering on what we saw today … to see war vets being beaten by the police. We want audience with our patron so that we understand where the compasses have gone wrong in the organs of the party but there are rights that also have been transgressed.

“Freedom of expression and freedom of assembly are now abused so naturally we will also go to the courts. We thought the government and the party will be fair with us but it did not happen so we will go to the other arm of government which is the courts.”

The war veterans are allegedly supporting Mnangagwa, who is allegedly leading a faction of the party that wants him to succeed the president, while a rival group calling itself Generation 40 is backing First Lady Grace Mugabe for the presidential post.

He has been in power since Zimbabwe attained independence from British rule in 1980.

The deputy secretary of Zanu-PF’s youth league, Kudzai Chipanga, threw doubt on the gathering of war veterans outside his party’s headquarters Thursday, saying they were not ‘true’ veterans who had fought in Zimbabwe’s liberation war.

Meanwhile; supporters of People First or PF, a new political party which was officially registered with the Zimbabwe Electoral Commission last Friday, say they will now start campaigning for the party ahead of the 2018 general elections.

There was jubilation and ululation among People First members when they held their first meeting in Chinhoyi on Saturday. They were happy that the party has finally been officially registered in Zimbabwe.

The PF members, who addressed each other as nation builders, said the registration will now enable them to freely mobilize the electorate, hold rallies and public meetings without fear of the police.

The organizer of Saturday’s meeting, former Zanu PF and MDC-T provincial member, Tendai Musonza, said many MDC and Zanu PF followers were waiting for the party to register in order to join it.

Speaking at the meeting, Abigail Sauti, a former MDC-T National Council member, said she felt overwhelmed by the registration as this will allow them to market their party as many people were hesitant to join them because they were not registered.

Responding to questions, another former Zanu PF Mhondoro Mubayira Member of Parliament, Sylvester Nguni, said unlike other political parties, PF has term limits of two five-year terms on any position.

Tsvangirai also, says he will soon approach the international community to assist Zimbabweans who are food insecure and blamed his rival, President Robert Mugabe, for downplaying the unfolding humanitarian crisis.

President Robert Mugabe has declared the food crisis a national disaster and appealed for $1.6 billion to feed 3 million people – about a quarter of the population – after the worst drought in more than two decades damaged crops and killed thousands of livestock.

But Tsvangirai and some analysts say the declaration of a food emergency came late and is putting many Zimbabweans at risk.

In an exclusive interview with VOA Studio 7 for Zimbabwe, Tsvangirai said, “We are not seeing government expressing its urgency and inviting those who can help to help. I am going to write to various agencies, urging them to act urgently.”

Tsvangirai added, “We need a national response that will determine the extent of the crisis. There seem to be no urgency, there seem to be no focus, food distribution is haphazard, it’s partisan in certain areas.”

An estimated three million Zimbabweans are now food insecure and one of the hardest hit areas is Masvingo province.

Tsvangirai visited the province this week and told VOA Studio 7 for Zimbabwe that the situation in the province is desperate.

But addressing the media in Harare, Vice President Emmerson Mnangagwa, who is also the chairperson of the cabinet Food Security and Nutrition Committee, said the hunger and drought situation experienced in Zimbabwe is under control.

Mnangagwa said Harare has secured funding from the Exim Bank of China and procured more than 650,000 tonnes of maize.

He added that logistics are underway to transport the maize.

Mnangagwa noted that “we are aware of the drought situation and government has moved in to purchase maize from friendly countries.”

ZIMBABWE - The leader of Zimbabwe’s opposition Movement for Democratic Change Morgan Tsvangirai has warned that Harare is on the edge of the precipice as President Robert Mugabe is losing control of his party and nation. In an exclusive interview with VO...
Share via
x
More Information