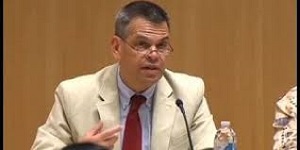 ZIMBABWE – Outgoing United States Ambassador to Zimbabwe, Mr Bruce Wharton, yesterday described President Mugabe as a lion of Africa who dedicated his life to fighting for the liberation of the continent.

Speaking at a media breakfast meeting in Harare, Mr Wharton said President Mugabe had not only contributed to the liberation of Zimbabwe, but other countries including South Africa.

“Robert Mugabe is a lion of Africa. He has dedicated his life to create a free and independent Zimbabwe. He is one of the leaders not only of Zimbabwe, but he helped to bring down apartheid in South Africa,” he said.

Mr Wharton also saluted Zimbabweans for their resilience even under harsh economic conditions induced by the illegal sanctions.
“The people of Zimbabwe are extraordinary based on my experience in Europe, South America, Central America and all across Africa. Zimbabweans are special people with enormous potential.

“I will miss the power of the resilience that Zimbabweans taught me. When life gets tough sometimes you throw your hands up and just say forget it I am finished and walk way but Zimbabweans have not done that. Life has been tough yet you (Zimbabweans ) kept fighting a good fight,” he said.

“I have spent seven years on diplomatic chores in Zimbabwe and I cannot forget this country.

“I can not turn my back on this country. I will make a conscious effort to pull away from Zimbabwe.

“I will miss the climate, the bush, the chance to go for fishing with friends at Zambezi River followed elephants along Gonarezhou.

Mr Wharton said Zimbabwe had the potential to attract investors regardless the battering it received from the West.

“My recommendations to Zimbabwe is that they should not be looking East, West, North or South, but should turn 360 degrees and take the best offer.

“We, Brazil, China and America should all be competing for Zimbabwe and Zimbabwe can take the best offer. Zimbabweans should not limit themselves,” he said.

Mr Wharton said his government would continue assisting projects on health, water and sanitation and agriculture.

“My office is trying to convince American investors to take a new look on Zimbabwe. We will continue supporting health, particularly HIV and Aids projects, maternal care as that area is very critical. We should invest in health if we are serious about our future,” he said.

He said to boost food security, the US would also assist the agriculture sector by empowering farmers to become resilient to climate change, improve value addition of the produce and link the farmers to viable markets. “We are looking at $21,5 million for five years,” he said.

During his second term in Zimbabwe, Mr Wharton said he managed to make Zimbabweans understand the people of Washington and vice versa.

Mugabe to remain as EU lifts all sanctions

Mugabe is 'a lion of Africa' says Wharton

ZIMBABWE - Outgoing United States Ambassador to Zimbabwe, Mr Bruce Wharton, yesterday described President Mugabe as a lion of Africa who dedicated his life to fighting for the liberation of the continent. Speaking at a media breakfast meeting in Harare, Mr...
Share via
x
More Information
x