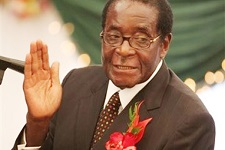 1.4kViews
0 Shares Share on Facebook Share on Twitter
ZIMBABWE – President Robert Mugabe was last night expected to leave for Turkey to attend the G20 summit in the city of Antalya. Mugabe, who this year alone has made no less than 30 foreign trips regionally, continentally and internationally, travels to Turkey in his capacity as the African Union chairperson.

He will join other world leaders who form the G20, a grouping of world’s largest advanced and emerging economies, representing about two-thirds of the world’s population, 85% of global gross domestic product and over 75% of global trade.

According to a statement from the Turkish embassy in Harare, the AU chair will join South Africa, Argentina, Australia, Brazil, Canada, China, France, Germany, India, Indonesia, Italy, Japan, Republic of Korea, Mexico, Russia, Saudi Arabia, South Africa, Turkey, the United Kingdom, the United States and the European Union at the summit which seeks to explore ways of growing their economies and increase their dominance.

From Africa, it is only South Africa which is a member of the G20 and Mugabe is attending the summit in his capacity as AU boss.