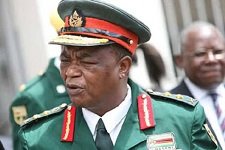 Mugabe this week invited military chiefs to his birthday celebration organised by his office staff at State House on Monday as part of his strategy to pacify and contain the army. Prior to that he had held several meetings with security bosses, including the ministers of Home Affairs, State Security and Defence.

Addressing a rally in Chiweshe a fortnight ago, Grace accused military chiefs of planning to bomb her Mazowe dairy to instill fear
into the First Family so that Mugabe relinquishes power.


She also alleged that there was a plot to kill her last born son, Bellarmine, increasing tensions between the Mugabes and the military in the process.

Last week on Tuesday Grace was privately briefed by senior intelligence officers on the problems her remarks at Chiweshe, as they
sought to contain the fall-out with army commanders.

The First Lady attacked war veterans’ leaders, particularly their chairperson Christopher Mutsvangwa who has been vociferous in his support of Mnangagwa.

Relations between Mugabe and the military, which have been largely strong since Independence, soured after the president publicly lambasted service chiefs for interfering in Zanu PF affairs at the party’s annual conference in Victoria Falls last December.

Chiwenga is being targeted as he is seen as one of Mnangagwa’s strongest allies.

Government and military sources say Mugabe has however been making moves to pacify the army and fix strained civil-military relations.

Senior security officials, particularly from the Central Intelligence Organisation (CIO), have also intervened to manage the situation and ensure relations do not deteriorate further.

Intelligence officers told Grace last Tuesday her remarks had ruffled army commanders’ feathers and created security problems for her. “She was informed of how senior officers in the military had reacted to her statements. She was basically told there was a lot of anger in the army,” said a security official.

The security officials also advised Grace to tone down her rhetoric and avoid attacking the military and war veterans at her rallies.
Grace was, however, said to have been uncomfortable with the briefing and wanted to know why the military was interfering in Zanu PF affairs.

Despite Grace’s anger over some senior military officials’ involvement in Mugabe’s succession dynamics, the president has been
making frantic efforts to build bridges with the military.

“The invitation of army commanders to Mugabe’s birthday function at State House on Monday was basically meant to send a message that they are still wanted and appreciated. Mugabe wants to put across the message that as their Commander-in-Chief, he is not fighting them as they are critical to his rule,” said an official.

Government sources say Mugabe views the current problems as political and therefore does not want the military to interfere.

Mugabe has of late held a number of meetings with his security ministers and service chiefs over the political and security situation
in the country.

On Friday last week, he held a meeting with Mnangagwa and co-Vice-President Phelekezela Mphoko to discuss the political and security situation in the country.

The meeting followed a clash between war veterans and the police last Thursday. The war veterans had gathered at City Sports Centre to protest against’s attack of the military and their leaders. They were, however, dispersed using teargas and water cannons.

Sources said Mugabe has been informed that the military was in solidarity with the war veterans, who in any case are a reserve force.

After the meeting, Mugabe had a televised address to the nation where he apologised to war veterans but attacked Mutsvangwa for organising a meeting without informing him. Mugabe is the patron of the war veterans association.

He also said action would be taken on Mutsvangwa.

Government sources have indicated that Mutsvangwa was likely to be dropped from cabinet while moves will be made to remove him from leading the organisation, as part of ways to contain the former freedom fighters.


Sources said after the Friday meeting, Mnangagwa had a meeting with Chiwenga at a house in Borrowdale. The two also met on Monday last week after Mnangagwa’s meeting with Mugabe, Mphoko and Grace.

CIO operatives are desperate to gather what transpired during the meeting.

On Monday this week, Mugabe also held security briefings with senior military officials where again the political and security situation in the country was the main subject on the agenda.

He also discussed preparations of his 92nd birthday bash in Masvingo tomorrow, in light of the political fights in the province.

Other than the high level meetings involving Mugabe, security meetings have also been held at various levels including intensified
briefings from CIO operatives to their Director General Happyton Bonyongwe and meetings between senior CIO operatives and State Security minister Kembo Mohadi.

Mohadi has reportedly been demanding thorough reports and has been asking a lot of questions during briefings, possibly because of his background as an intelligence operative.

There have also been meetings between state security ministers and the president.

Government sources, however say, Mugabe would most likely not renew Chiwenga’s contract “which has either expired or is about to expire”.

Grace’s vitriol against service chiefs comes as it has emerged most senior military figures are solidly behind Mnangagwa’s presidential bid.

Please get Tendai Biti back on the economy levers

Mugabe mends fances with army, invites them to bash