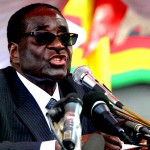 ZIMBABWE – A Cape Town property that belonged to the Zimbabwean government has been auctioned off for R3.76 million to cover a legal costs order it owed AfriForum.

Cape Town – Senior officials from the ruling Zanu-PF party have reportedly indicated that President Robert Mugabe might be forced to quit before his current tenure ends in 2018 due to “explosive succession and economic problems”.

This comes as Mugabe, 91, continues to make blunders which the opposition says is a sign the veteran leader is “too old” to continue leading Zimbabwe.

According to the privately owned The standard newspaper, the past 10 months have been especially telling for Mugabe, who among other things, revealed that his wife has literally “captured me at home”, declared his rival Morgan Tsvangirai the legitimate winner of the 2008 poll, famously fell down a flight of steps in Harare, and read a wrong speech at the opening of parliament last week.

The report says that although Mugabe is visibly frail, those close to him claim he is as fit as a fiddle and that he only suffers from an eye cataract. They also claim he will be fit to contest the 2018 elections when he will be 94.

But top Zanu-PF insiders indicate the nonagenarian might quit soon, according to the Zimbabwe Indepndent newspaper.

“We have been told that [Mugabe] is leaving after his SADC and AU mandates. Since he completed his SADC tenure last month and is finishing the AU one in January, our understanding is that he will leave anytime after that,” a senior official close to Vice President Emmerson Mnangagwa was quoted as saying.

Mnangagwa is widely tipped to be Mugabe’s successor, with the report saying he has over the past months been seen increasingly overseeing the day-to-day running of government.

Another official quoted by the newspaper said it would not be surprising if Mugabe were to go before 2018 following his “monumental political blunder” of reading the wrong speech in parliament.

But Mugabe’s spokesperson, George Charamba denied the speculation, saying Mugabe would be available for the 2018 elections.

“What is the link between the AU and the Zimbabwean presidency? They will meet him in 2018,” Charamba was quoted as saying.

Mugabe is a dictator who imposes his ideas on others: Didymus Mutasa

Mugabe might quit before end of tenure – Zanu-PF officials

ZIMBABWE - A Cape Town property that belonged to the Zimbabwean government has been auctioned off for R3.76 million to cover a legal costs order it owed AfriForum. Cape Town – Senior officials from the ruling Zanu-PF party have reportedly indicated that ...
Share via
x
More Information
x