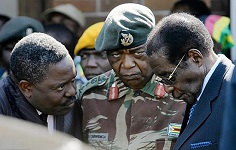 ZIMBABWE – It has been rather refreshing to watch Zanu PF’s Hollywood-style succession drama from the sidelines at home while I was on leave since the beginning of the year until this week.

Now back in the newsroom after a long break, it is no longer just fascinating, but rather scary as details of President Robert Mugabe’s vicious power struggle filter through and uncontrolled public clashes by senior ruling party officials, war veterans and tensions within the army spread, painting a Hobbesian state of nature in Zanu PF — everyone against everyone!

In a situation like this, where lunatics have taken over the asylum and the centre can no longer hold as no common authority still exists to resolve the growing internal disputes, we can easily imagine, as Hobbes did, that the state of nature within Zanu PF — where there is cutthroat competition for power, trappings of office and resources — has now become a “state of war”, even worse, a war of “all against all”.

While renewed infighting has been raging since the removal and subsequent expulsion of former vice-president Joice Mujuru and other high-profile figures, political temperatures within the party steadily rose during the course of last year as the two rival camps led by Vice-President Emmerson Mnangagwa and First Lady Grace Mugabe fought a war of attrition.

Mugabe’s succession struggle has now become a prolonged conflict in which each side seeks to gradually wear down the other by a series of small-scale actions.

As we report in our lead story in this edition, Mnangagwa apparently enjoys the support of top military commanders whose feathers have been ruffled by Grace through her stinging remarks at a rally in Chiweshe last Friday where she accused the vice-president of plotting to oust Mugabe and the army of scheming to bomb her Mazowe empire as well as kill her son to instill fear in the hearts of their opponents.

Given the high political stakes, it looks like there is no more going back on both sides. It’s now a Churchillian approach: “If you’re going through hell, keep going.”

The open warfare within Zanu PF and the resultant implosion can only get worse before the stand-off is resolved.
But the biggest problem is the army. As informed sources told us this week, the army is now trying to leverage its influence and to test civilian control to obtain concessions and job security without upsetting the equilibrium of “military tutelage” under which the Zanu PF regime currently rules.

What we are seeing now is a delicate situation and balance involving political brinkmanship between Mugabe and army chiefs. We are seeing the art or practice of pursuing a dangerous process or risky gamble to the limits of safety before stopping; stretched it’s zero-sum politics. In any game of brinkmanship, it is possible that there would a precarious and uncertain stand-off, or indeed, one side will collapse suddenly. It depends on what happens next.

It’s a complicated strategic calculus: Mugabe is likely to calm down the situation and restore his control over the military given his power and influence, but if he underestimates the military threat to his rule and rocks the boat too much, he might find himself in serious trouble.

The military is the pillar of support and strength for Mugabe’s rule, especially after 2000 when the opposition MDC emerged and began to threaten his regime’s survival. Since then, even before that, the army propped up Mugabe to win elections by hook or crook and keep the MDC at bay.

Mugabe’s use of the military to suppress dissent and the opposition has created a moral hazard; for the very resources that enable his regime’s repressive apparatus to suppress its opponents also empower them to act against the regime itself. It can backfire. As things fall apart, the endgame is likely to be nasty and brutal.

President Robert Mugabe has a crush on me- Loliwe singer Zahara

ZIMBABWE - It has been rather refreshing to watch Zanu PF’s Hollywood-style succession drama from the sidelines at home while I was on leave since the beginning of the year until this week. Now back in the newsroom after a long break, it is no longer jus...
Share via
x
More Information
x