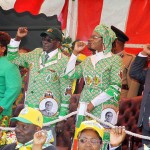 ZIMBABWE – President Robert Mugabe yesterday refused to take questions about his holiday in the Far East, preferring to speak only about a five-hour meeting he held with visiting Equatorial Guinea president Teodoro Obiang Nguema at State House.

Mugabe and his wife Grace returned home on Friday night from Dubai and the Far East where the First Family had been holidaying.

Contrary to speculation that he was facing serious health problems, Mugabe looked fit.

Speaking about his meeting with Nguema, Mugabe said he would mobilise other African leaders at the forthcoming African Union summit to build consensus on calling for reforms in the United Nations Security Council.

Mugabe leaves the AU chair at the next continental meeting in Addis Ababa this week.

He said the Equatorial Guinea president had come to meet him for consultations.

“But the Security Council has already had consensus, as you know, so it is now up to ourselves, all members to consolidate and for us to stand together and offer that solidarity to the permanent members of the council,” Mugabe said.

Africa is fighting to have a slot in the UN Security Council permanent membership.

Mugabe said he discussed with Nguema issues to do with the economy, security of the continent, terrorism and even soccer, but the issue of UN Security Council reforms was very important.

Nguema said he saw it important to consult Mugabe now and then as he was the only surviving Pan Africanist still in a leadership position.

He said together with Mugabe, they would push for at least one African country with voting powers to be included in the UN Security Council.

Zimbabwe and Equatorial Guinea have maintained close relationships since 2004 when Zimbabwean security intercepted alleged coup plotters led by one Simon Munn who were on their way to the West African country to topple Nguema.

ZIMBABWE - President Robert Mugabe yesterday refused to take questions about his holiday in the Far East, preferring to speak only about a five-hour meeting he held with visiting Equatorial Guinea president Teodoro Obiang Nguema at State House. Mugabe and ...
Share via
x
More Information