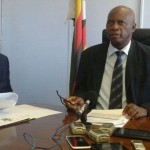 Speaking at a familiarisation tour of Mutare yesterday, Zhuwao, who was recently appointed Youth, Indigenisation and Economic Empowerment minister, said thousands of Zanu PF youths would lose jobs if plans to cut the civil service went ahead.

“Some are saying we are going to fire youth officers. Who do you think you can fire? It might be you who will go home first. If it is an MP who is saying that, then we should go and sit down with him,” he said.

Chinamasa has repeatedly raised concern over government’s huge wage bill, describing it as unsustainable, as it swallowed 83% of government revenue.

The Civil Service Commission is currently looking at various ways in which the bloated civil service can be reduced, while Mugabe and Vice-President Emmerson Mnangagwa have stepped up efforts to attract FDI to jumpstart the ailing economy.

Both Mugabe and Mnangagwa recently assured foreign investors that the controversial Indigenisation policy would be re-looked at.

But Zhuwao, whose political fortunes appear to be rising, said the on-going calls for injection of FDI were against Zanu PF’s maligned indigenisation policy.

He also said moves to reduce the civil service would disadvantage thousands of Zanu PF youths, a majority of whom were employed as constituency youth officers, with their salaries paid by the taxpayers.

In April this year, Chinamasa received a tongue-lashing from Mugabe after he announced that government had suspended civil servants’ bonuses.

But Mugabe reversed the decision and ordered Chinamasa to “look for the money”, describing bonuses as a non-negotiable matter.

On FDI, Zhuwao said: “They go to hotels with microphones saying that we should promote foreign direct investment. They are saying that you should go home.”

He said there was no going back on the indenisation, despite a pronouncement by some senior government officials that the policy was being re-looked.

“There are people going around saying that they are going to re-look the indigenisation policy, what re-look comrades, this is something for the masses. So if I go home (fired as Youth Minister) then all of you will go home,” Zhuwao chanted.

War Veterans minister, Chris Mutsvangwa also recently attacked Chinamasa for his stance on FDI, saying there was no need to grovel at the West, as Zimbabwe had a reliable friend in China.

Chinamasa, in his recent mid-term Fiscal Policy Review statement in Parliament,alluded to impending job cuts, as government sought to reduce its wage bill to 40 % from the current 80 %.

Zimbabwe Investment Authority chairperson Nigel Chanakira said while he was unwilling to comment directly on Zhuwao’s remarks, it was common knowledge that every national economy,regardless of size, was sustained by FDI.

He said investments could be done on three ways, savings, borrowing and FDI.

“When you want to push investment the best way is to bring FDI,” Chanakira said.

“When we have FDI it’s not only about money but you also get technology, managerial competencies and markets. FDI comes with expertise and markets.”

Industry minister Mike Bimha yesterday declined to comment on the matter, saying he wanted to chat with Zhuwao first.

He, however, said it was important for Zimbabwe to be guided by Mugabe’s 10 point plan he unveiled during his State of the Nation Address.

Public Service minister PriscahMupfumirasaid she was unaware of the context in which Zhuwao made the remarks, but said her ministry had carried out audits.

“I don’t know the context in which he said that, but all I know is that there was an audit which was presented in Cabinet,” she said.

‘Mugabe concerned about state of affairs’