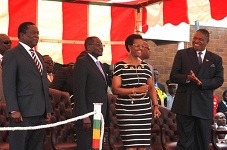 ZIMBABWE – Analysts have said that  after 35 years of iron fisted rule President Robert Mugabe is paving way for his wife, Grace to take over from him, as factional and succession battles continue devouring his party.

Dewa Mavhinga senior southern African researcher at Human Rights Watch said Mugabe is heading a faction within Zanu-PF that is pushing for Grace to take over, but facing strong resistance from several other factions.

He said it was clear that Grace’s elevation was meant to create a Gushungo empire, adding that Mugabe has always been on wife’s side.

It was learnt yesterday that far from dousing the demons of factionalism devouring the ruling party, as well as the rising animosity towards Grace within the post congress Zanu-PF, the nonagerian’s utterances may have had the opposite effect.

Party members opposed to Grace and the faction aligned to her are circulating a series of messages on social media and other platforms, dissuading Zanu-PF supporters from attending her planned rally in the troubled province this week.