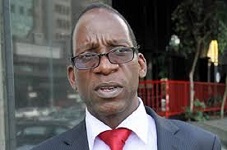 The theme of the meeting was “Is Zimbabwe following its own constitution”.

Madhuku said Mugabe has never respected the country’s constitution since independence, adding that it was a waste of time and resources to craft a constitution which Mugabe and his government are brazenly disrespecting.

The National Constitutional Assembly (NCA) party leader accused Mugabe of operating by his own unwritten constitution which he uses to run both the ruling Zanu PF party and the country.

“We have two constitutions in this country; the one is written which I hear some of us saying they want to do civic education on, but there is another constitution which we see every day,” said Madhuku.

“If you go out in the streets and ask what is the constitution of the country people will tell you that there is one called Robert Mugabe who is the President of the country, who will do this and that, and that they take seriously that his wife will be the next President.

“So, in any debate about constitutionalism we must always know that there are two constitutions in this country,” said Madhuku.

This was after long constitution making process which Madhuku’s NCA boycotted.

At the time, the NCA argued that government was supposed to task an independent commission with the mandate of writing the supreme law of the land.

To cement his argument, Madhuku launched a ‘No Vote’ campaign against the government-initiated constitution making process which however, flopped.

Zimbabweans Should Know And Assert Their Rights: Mavhinga

ZIMBABWE - Mugabe does not respect national constitution … Lovemore Madhuku The University of Zimbabwe lecturer was one of the guest speakers at an International Human Rights day event which was organised by the Zimbabwe Human Rights NGO Forum and the Zi...
Share via
x
More Information
x