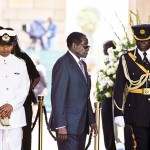 ZIMBABWE – The Commander-in-Chief of the Zimbabwe Defence Forces, President Robert Mugabe has promoted 10 colonels to the rank of brigadier generals.

The 10 were conferred with their new ranks by the Zimbabwe National Army (ZNA) Commander, Lieutenant General Phillip Valerio Sibanda at the army headquarters in Harare.


Conferring the new ranks, Lieutenant General Sibanda urged all the newly promoted senior officers to remain vigilant and professional in the discharge of their duties.

“You are part and parcel of the team that ensured that peace and tranquillity prevails in the country and I urge you therefore to continue the great work for your country,” he said.

Brigadier General William Dube who spoke on behalf of the other brigadier generals said they are prepared to take up the challenges that come with the new ranks.

“W are happy for the new ranks and we promise to work hard for the nation,” he said.

Zimbabwean Elections Unmasked: What Next?

Does Trump’s pledge to lock up Mugabe Trump his racism?