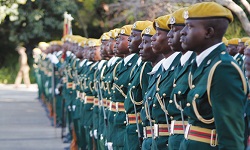 ZIMBABWE – High-ranking military officers, who were part of the team of senior army commanders which plotted President Robert Mugabe’s fight back campaign of violence and brutality in the run up to the June 2008 presidential election run-off, have been rewarded with promotions.

The promotions are widely seen as a thank you gesture by Mugabe who was rescued by the military after losing the first round of the 2008 presidential election to MDC-T leader Morgan Tsvangirai.

After the Zimbabwe Election Commission withheld results for a month, the military embarked on a violent campaign to suppress the opposition, resulting in Tsvangirai pulling out of the poll in protest over violence and the intimidation of his supporters.

Mugabe last week promoted 10 colonels to the rank of brigadier generals, and among those promoted were Morgan Mzilikazi, Fidelis Mhonda and Christopher Sibanda, who took part in the 2008 military campaign.

The three were cited in a Crisis in Zimbabwe Coalition (CiZC) 2011 report: The Military Factor in Zimbabwe’s Political and Electoral Affairs as some of the senior military commanders responsible for the 2008 violence.

Brigadier-General Mzilikazi was deployed in Buhera South and Central constituencies of Manicaland while Mhonda was deployed in Rushinga, Mashonaland Central. Sibanda oversaw the military operation in Bulawayo.

The new brigadier generals add to the long list of senior security personnel who have been rewarded by Mugabe either though promotions or postings to diplomatic missions after propping him up in 2008 and previous elections.

Brigadier-General Mike Sango, who was part of the Joint Operation Command top brass which held meetings with Zanu PF provincial coordinating committee officials in Manicaland province in preparation for the 2013 elections, was appointed Zimbabwe’s ambassador to Russia in March.

Also in March, Mugabe promoted Brigadier-General Sibusiso Moyo to the rank of Major-General. Moyo commanded the military operation in Midlands province during the runoff period.

In 2012, Mugabe sent tongues wagging when he promoted Brigadier-General Douglas Nyikayaramba to the rank of major general despite him openly pledging his loyalty to Zanu PF.

Nyikayaramba had played an important role in ensuring Mugabe wins the 2002 presidential elections when he was chief executive officer of the Elections Supervisory Commission.

In 2010, Mugabe rewarded Wing Commander Winnie Mandeya, who was operating in Makoni South, with a promotion to the rank of group captain.

According to the CiZC report, the role of the military was covert and subdued in the lead up to the March 2008 elections, but it became decisive and toxic during the presidential run-off election campaign period between April and June 27.

“Following a defeat at the polls by the MDC in March 2008, Zanu PF’s evaluation noted the obvious, that the party structures were virtually non-existent and lacked capacity to mount an effective campaign, hence the strategy to turn to the military for a campaign of coercion …,” reads part of the report.

“… Between April and the June 27 run-off election, the security forces took a central role in violently campaigning for the Zanu-PF candidate, Robert Mugabe. During this period soldiers were deployed in all the 10 provinces across the country with the aim to ensure that Zanu-PF wins the presidential election at all costs.”

MDC-T claims 200 of its supporters were killed, while thousands were displaced during the period.

ZIMBABWE - High-ranking military officers, who were part of the team of senior army commanders which plotted President Robert Mugabe’s fight back campaign of violence and brutality in the run up to the June 2008 presidential election run-off, have been r...
Share via
x
More Information