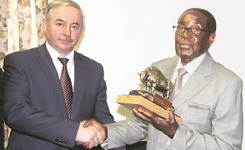 ZIMBABWE – President Mugabe has granted the nod to a number of investment deals with Belarus that will see the Eastern European country, bringing in machinery for various sectors.

Gen Sheiman is the administrator of the affairs of President Lukashenko.

A meeting between President Mugabe and Gen Sheiman preceded the signing ceremony that was officiated by Vice President Emmerson Mnangagwa.

Speaking to the media after the meeting, Gen Sheiman said President Mugabe expressed his desire to see cooperation between the two countries soar.

He said a number of Zimbabwean Government officials among them VP Mnangagwa, had been to Belarus where they acquainted themselves with the opportunities that the country could tap from.

“As such, we will cooperate in delivering Belarusian machinery. Also the President approved cooperation in the area of agriculture.”

He said they also discussed about the creation of joint ventures in the extraction of gold and other precious minerals that was later signed between the two countries.

“We also discussed cooperation in the field of electric energy, construction of roads, houses and bridges. Also, we discussed the teaching of Zimbabwean students in many universities of the Republic of Belarus. We are going to big scale bilateral cooperation and this is very optimistic,” said Gen Sheiman.

Minister Chidhakwa said the signing of the joint venture agreement between the two countries would see the country exploit its minerals especially gold.

“This agreement seeks to provide a framework for us to access capital equipment from Belarus and also to access technical know-how particularly as it relates to mining on the rivers.

“You know that Government took a decision that mining on rivers is going to be a monopoly of Government. We are implementing that by getting ourselves a technical partner who will work with us.

“We want to make sure that not only do we extract the minerals from the rivers, but we are also able to rehabilitate the rivers so that generations to come will continue to enjoy the water,” said Minister Chidhakwa.

He said exploratory work had started on the Save River, while a number of other rivers with minerals would also be explored and mined using the latest technology from Belarus.

ZIMBABWE - President Mugabe has granted the nod to a number of investment deals with Belarus that will see the Eastern European country, bringing in machinery for various sectors. Implementation of part of the deals saw Mines and Mining Development Ministe...
Share via
x
More Information
x