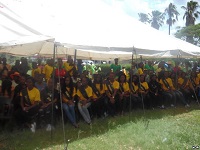 ZIMBABWE – Preparations for President Robert Mugabe’s $800,000 birthday bash are in top gear despite reservations from some Zimbabweans who believe that the party set for Masvingo province on Saturday is a waste of money for a nation facing a devastating drought.

Organisers of the event say all is set for the bash, known as the 21st February Movement, amid pomp fanfare among some members of the ruling party who staged a mini-carnival in the city centre on Thursday.

Although some youth groups have threatened to stage massive streets protests tomorrow in an attempt to block the event, Ezra Chadzamira, who heads the birthday party’s organizing committee, says everything is in place at the Great Zimbabwe monuments.

Chadzamira says they won’t tolerate any public protests meant to derail the celebrations.

“We don’t tolerate any demonstration towards the president’s birthday. We encourage all people to unite and attend the celebrations. The president is the solution to every problem and for the preparations we are at 100% done. Everything is now in position and we are not concentrating in ferrying people to the event,” he says.

Zanu PF supporters say the lavish birthday party is supposed to go ahead though some people are against the event.

Talent Majoni, a young ruling party supporter, noted that they are pleased that Masvingo is hosting the president this year.

“Cde Robert Mugabe is our revolutionary icon and the redeemer of the Munhumutapa Empire. We thank God for the many years and everybody in the province is in a jovial mood . We say happy birthday Gushungo.”

Another Zanu PF party youth, Bright Kwangwa, says people who are opposed to the birthday party should know that the president will have an opportunity to see for himself the drought situation in Masvingo province.

“The birthday celebrations of the President will not stop, being almost 100% nothing can stop it. His coming here will give him an opportunity to see for himself so that he has first-hand information and solve the problems like a father,” says Kwangwa.

However, some local residents still maintain that the birthday bash is misplaced as people are struggling to get a decent meal a day due to the current drought.

Prosper Tiringindi of Rujeko suburb says it is strange that the president will be eating good food with his friends when he has not yet even set foot on areas facing food shortages.

He said the Mr. Mugabe’s government has even failed to resettle about 20,000 people who were displaced by floods in Masvingo almost two years ago.

“For the mean time there is nothing to celebrate, we have social problems we are facing. We had the Chingwizi disaster, the president never came here to see the people but now he is coming to a lavish bash to wine and dine. I don’t see the need for the celebrations here in Masvingo,” says Tiringindi.

His views are echoed by Ephraim Mutombeni of the Zimbabwe National Students Union, who says the event should be abandoned.

“As students we don’t welcome the decision by the president. We have challenges in education we do not have a proper campus and we have accommodation problems with five students sharing a room. The president should have channeled the money towards improving our welfare. This to us shows that the president is heartless, we don’t want bashes here.”

Mr. Mugabe turned 92 on Sunday and has already been chosen as Zanu PF’s presidential election candidate for the 2018 polls. He will be 94 years old that year.

ZIMBABWE - Preparations for President Robert Mugabe’s $800,000 birthday bash are in top gear despite reservations from some Zimbabweans who believe that the party set for Masvingo province on Saturday is a waste of money for a nation facing a devastating...
Share via
x
More Information