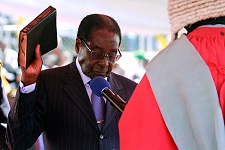 ZIMBABWE – President Robert Mugabe has sworn in the National Peace and Reconciliation Commission and the Zimbabwe Anti-Corruption Commission (ZACC) members at State House in Harare this Wednesday afternoon.

The National Peace and Reconciliation Commission is being chaired by former speaker of Parliament, Cyril Ndebele, and other members of the commission are Lilian Chigwedere, Patience Chiradza, Choice Ndoro, Charles Masunungure, Geoffrey Chada, Leslie Ncube and Godfrey Chekenyere.

ZACC is chaired by former Permanent Secretary of Home Affairs and then Defence, Job Whabira.

Out of the members in the two commissions, seven of them are women, a testimony of President Mugabe’s commitment to achieving gender equality and gender parity in the inclusion of women in decision making positions and other institutions and bodies that play a role governance.

At the same ceremony, the Minister of State Liaising on Psychomotor Activities in Education, Cde Josiah Hungwe was sworn in as full cabinet minister. All along, he was not sitting in cabinet.

Mutambara and Chombo clash over GNU