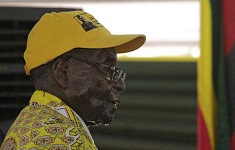 ZIMBABWE – HARARE – With Zimbabwe’s economy continuing to implode amidst rising poverty levels, heightened job redundancies and crippling power cuts, Zanu PF insiders say President Robert Mugabe is caught “between a rock and a hard place” as he battles to control the deadly infighting within his party and reaches out to the West for fiscal support.

But one of the well-placed sources who spoke to the Daily News yesterday said the frail nonagenarian and his close lieutenants were like “rabbits confused by light” as they cluelessly pressed “the wrong buttons” in the desperate hope of stumbling upon an economic turnaround.

“They are like rabbits caught in the lights of a speeding oncoming truck and are furiously pressing all the wrong buttons, hoping for an economic miracle.

“I really feel for reformists like (Finance minister Patrick) Chinamasa who realise that Zimbabwe’s political leadership needs to swallow its pride and work with the West to save the country, even as we talk rubbish about looking East, as there is nothing there in the East for us.

“But then there are hardliners like (War Veterans minister Christopher) Mutsvangwa who think money grows on trees and are resisting engagement with the West, the IMF (International Monetary Fund) and the World Bank, incredulously believing that this is akin to selling out to the West, as if the East is helping us,” the senior Zanu PF official said.

Speaking at a recent IMF breakfast round-table discussion in Harare, Mutsvangwa said he did not understand the logic behind the Bretton Woods institution’s “sudden interest” in Zimbabwe.

“You come here and make us believe that you are interested in helping us make things better. If that is the case, why have you not put in a word with your masters. We need capital not discussions. Do something about our debt situation then we will start taking you seriously,” he thundered.

Mutsvangwa also dismissed Chinamasa’s efforts to engage the West, describing the rapprochement as nothing else but “regime change wrapped as a present”.

But a senior government official told the Daily News that although Mutsvangwa had insisted on being part of the delegation that is being led by Chinamasa and that is currently in Europe, he had been stopped from accompanying the delegation by “someone at the top” — hinting that either Mugabe or Vice President Emmerson Mnangagwa had hauled him in over the coals.

In the meantime, analysts say the inconsistencies in government over economic issues were a reflection of its brutal wars as the ruling party’s myriad factions battle to succeed Mugabe.

Academic Ibbo Mandaza said the conflicting views were sending mixed and confusing messages not only to potential investors, but also to ordinary citizens, to the detriment of the country and the economy.

“Chinamasa, however, seems to have had an upper hand and Mutsvangwa, and the people he is representing on the left, are being dismissed as less important. This is a reflection of how the party is fractured. The party is splintered and there is lack of unity in the whole movement,” he said.

University of Zimbabwe political science professor Eldred Masunungure also said as gung-ho as Mutsvangwa was, he was now “a not-so-significant factor to be considered”.

“The financiers are aware of the ideological differences, and I don’t think they will pay too much attention to Mutsvangwa because he is not a central player in the issue. The person they are concerned with is the minister of Finance. The key thing is, does the Finance minister have the support of the president?”

“However, all this is a clear reflection of the on-going factional fights. We are likely to see an escalation of the fights and contradictions if the succession issue is not resolved soon,” Masunungure said.

In the meantime, the African Development Bank (AfDB) recently announced its willingness to support the Zimbabwean government to clear its $601 million arrears with the continental lender.

However, an executive director with the AfDB, Sibry Tapsoba, said such support was still awaiting the bank board’s approval.

On the hand, Chinamasa is on record saying Zimbabwe was poised to take the “painful road” and repay everyone it owed money before accepting fresh funding from international capital markets.

“We are indebted to everyone we have done business with … of course, no one will want to avail funds to us with such a status so we are not going to accept anything until arrears are settled,” he said, adding that the country’s debt repayment arrears stood at $1,8 billion.

The finance minister also said multilateral institutions were, however, welcome to inject capital into the private sector, as clusters such as manufacturing and banking were in “dire need of new capital”.

Man charged for insulting his stepmother

The UK needs to stay out of Zimbabwe’s succession politics

Students in Zimbabwe are making beer with breakfast cereal