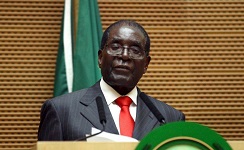 ZIMBABWE – Zimbabwean President Robert Mugabe received a standing ovation from his peers at the African Union (AU) summit in Addis Ababa, Ethiopia, on Saturday as he handed over the chair of the body with a rousing speech, filled with more than his usual invective against former colonisers, imperialists, westerners, US President Barack Obama, the United Nations and whites.

UN Secretary General Ban Ki-moon squirmed in his seat on the podium when the 91-year-old Mugabe – still feisty despite the annual eruption of rumours about his death this month – threatened that Africa would walk out of the UN unless it was given permanent representation on the UN Security Council.

He said Africans were not real members of the UN — only those with white skins were members — and if they decided one day “down with the UN” they would walk out of it.

“If the UN is to survive, we [Africa] must be equal members of it,” he said to loud applause.

“You’re a good man, Mr Ban Ki-moon, but we can’t make you a fighter. That’s not what your mission was. But we shall fight for our own identity and personality as Africans.”

He told Ban to tell the UN that Africans “are also human, not ghosts. Tell them, that we also belong to the world.”

The UN’s headquarters should not be in New York but in a more populous country, such as China or India, or in Africa, Mugabe said.

Yet Africans and others were placed there [New York] with the “white faces and pink noses next to us – yet how many are they compared with us?”

But Mugabe also thanked Ban for working with Africa in fighting Ebola and helping to fight terrorism and in other crises.

He suggested Obama was a puppet of whites. After berating whites for “dragging Africans across the ocean” as slaves, he said those blacks might now seem free – particularly Obama.

“But what is he? A voice made to speak their language, to act their act and not our act. They are still superior.”

Mugabe said that in America black people were still inferior, living in places such as Harlem in New York where education and healthcare were inferior.

Even after colonialism, the former colonisers were still everywhere in Africa, “if not physically then through NGOs”, a comment that drew much applause.

He said colonisers were also on the continent as “spies, pretenders, some say they are here in Africa to assist us, even in armed groups in our territories” effecting regime change.

At the end of his speech, which was scheduled to last 10 minutes but continued for close to an hour Mugabe handed over the AU chairmanship to Chad’s President Idriss Deby, giving him a mock bang on the head with the chairperson’s gavel as he did so.

He assured Deby that he would still be around if he wanted to call on him. “I will still be there – until God says, ‘Come to join the other angels’,” he said to loud laughter.

Mugabe raised his fist twice in a black power salute when he returned to his seat.

South African President Jacob Zuma seemed uneasy about the standing ovation, rising to his feet slowly and only after nearly everyone else had.

ZIMBABWE - Zimbabwean President Robert Mugabe received a standing ovation from his peers at the African Union (AU) summit in Addis Ababa, Ethiopia, on Saturday as he handed over the chair of the body with a rousing speech, filled with more than his usual i...
Share via
x
More Information