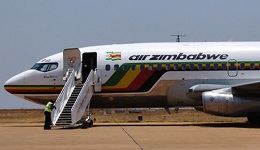 ZIMBABWE – As crisis-hit South African Airways (SAA) tries to stave off the publication of an internal memo on its financial status, President Robert Mugabe is stepping in to protect his own country’s loss-making airline.

He has signed amendments to the law to protect Air Zimbabwe from having its planes and other assets attached by creditors.

At the last count, Air Zimbabwe had a debt of nearly US$300 million, most of it owed to local creditors.

Now President Mugabe has taken the unusual step of granting the airline immunity from those creditors for the next three years.

The paper says this will give Air Zimbabwe breathing space to get together the cash to pay off its debts without the risk of having vital equipment, including planes, seized.

The government was last month reported to be looking for a business partner for the airline, which now faces competition from low-cost and regional carriers.