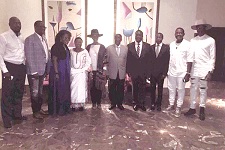 ZIMBABWE – President Robert Mugabe and his top brass — including Vice-President Emmerson Mnangagwa and several Cabinet ministers — took time off to spend lavishly and make merry in various resorts in Africa and the Far East over the just-ended festive season while the economy continued to sneeze.

As per his tradition, Mugabe and his family travelled to the Far East last month for the President’s annual recess.

According to pictures circulating on social media platforms, the First Family was last week joined by Mnangagwa and his wife Auxillia in some resort place believed to be in the Far East.

Mnangagwa later flew back to take over as Acting President yesterday and apparently allow Vice-President Phelekezela Mphoko, who has since gobbled $250 000 in hotel stay since his appointment in 2014, to take leave.

It was not clear yesterday whether Mphoko would as well join Mugabe in the Far East.

Contacted over Mnangagwa’s merry-making against the background of a comatose economy, Presidential spokesperson George Charamba last Friday said: “What is the newsworthiness of a VP going on leave?”

But political analyst Ibbo Mandaza said it was a shame that government leaders chose to flee domestic problems back home to wine and dine on foreign soil at a time most civil servants had not yet received their December salaries.

“The pictures speak for themselves. They go to other countries to celebrate somewhere other than their country, where they have left hell,” Mandaza said.

Another top government official who flew out for a holiday is Tourism minister Walter Mzembi, who went for what he said was a “traditional Christmas family holiday” at the Dubai Global Village in the United Arab Emirates.

Mzembi defended his holidaying, saying his conscience was clear after making sure that people in his constituency were “safe food-wise”.

“For the record, I personally sourced 145 tonnes of maize for my constituency and distributed it before Christmas. This is in addition to 30 tonnes maize meal and 15 tonnes of rice where I gave 10kg each to 4 000 women. I will be repeating this every quarter period. My conscience as I was holidaying was very clean, so I had a good time,” Mzembi wrote on his Facebook page.

Mzembi had a picture taken while at the Global Village, which is Dubai’s leading family entertainment and cultural attraction, that offers unique shopping experience through its 31 pavilions, each representing a different country.

Several other ministers were said to be in China for holidays and these include Environment minister Oppah Muchinguri and ICT minister Supa Mandiwanzira.

“She (Muchinguri) is coming back probably this week. She is on holiday in China,” an official in her ministry said.

Higher Education minister Jonathan Moyo travelled to Kenya to holiday with his in-laws and took time to post pictures of his trip, particularly in the plane and at airports.

Although it could not be immediately established, sources said Local Government minister Saviour Kasukuwere also took time off to relax in South Africa.

Labour minister Prisca Mupfumira was also said to be in the Far East for a holiday, but she was not immediately available to comment.

However, the ministers’ holidaying angered many people who felt Mugabe’s top brass was insensitive to the plight of Zimbabweans.

Civil servants did not have a pleasant Christmas after failing to get their salaries and bonuses.

Analyst Blessing Vava said: “What we have is a government by deception. They are completely out of touch with the realities on the ground. However, having them here is just the same as they are on holiday. Nothing was going to change even if they were around. They are a bunch of failures.”

Opposition MDC-T spokesperson Obert Gutu said this was not surprising as Zanu PF had never had people at heart.

“They use their government allowances and other perks to fund their holidays in very expensive foreign resorts in Dubai and the Far East. This is what you expect from a government which has since lost all moral authority to govern. While civil servants couldn’t be paid their December salaries on time and also failed to get their annual bonuses, literally, the entire Zanu PF Cabinet was enjoying a good time in foreign lands. These people are heartless. They don’t have any conscience at all,” Gutu said.

Analyst Alexander Rusero said: “It’s very simple, Zimbabwe is a kleptocracy, kleptocrats can rule without the people as long as their offices and power are guaranteed. But every nation, society or State gets the leadership that it deserves, Zimbabwe is no exception. It got a leadership it deserves on July 31, 2013, so there we are, we have to come to terms with hard reality that we have a leadership at best deserve and at least prefer.”

ZIMBABWE - President Robert Mugabe and his top brass — including Vice-President Emmerson Mnangagwa and several Cabinet ministers — took time off to spend lavishly and make merry in various resorts in Africa and the Far East over the just-ended festive ...
Share via
x
More Information
x