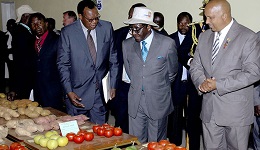 ZIMBABWE – President Robert Mugabe and the visiting Mozambican President Fillippe Jacinto Nyusi have expressed appreciation of the quality of agricultural products at the 105th edition of the Harare Agricultural Show.

The two presidents expressed the sentiments during the tour of several stands at the show earlier Friday.

President Mugabe and his Mozambican counterpart arrived at the Harare
Agricultural Show grounds around eleven in the morning to the welcoming song and dance from the Mufakose Traditional Dance Group.

After a short briefing by Harare Agricultural Show officials, the presidents visited the Julius Nyerere Hall where small scale and communal farmers are displaying their produce.

The two leaders took interest in the wide range of exhibits and wanted to know the land size that the farmers are using to produce their wares and the yields that they are fetching.

In the tobacco industry hall the two leaders were told that tobacco production in the small scale holder sector has taken a dip due to the poor prices being offered by the market and the unwillingness by the financial sector to fund production of the crop.

Contract farming has however expanded.

At the Southern Region Trading Company stand, Presidents Mugabe and Nyusi were told that the company’s products are suitable for all farm sizes.

The donated tractor has been of assistance to a whole community through provision of tillage services.

Seedco, a local seed manufacturing company, has assured the nation that it has adequate seed for the 2015-2016 rainy season.

At the cattle and livestock section, goats, sheep, horses and other animals were on display.

The last port of call was the First Family’s Alpha Omega Dairy and Gushungo Holdings stand.

ZIMBABWE - President Robert Mugabe and the visiting Mozambican President Fillippe Jacinto Nyusi have expressed appreciation of the quality of agricultural products at the 105th edition of the Harare Agricultural Show. The two presidents expressed the senti...
Share via
x
More Information