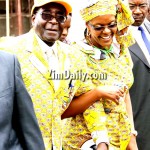 The veteran leader will attend 70th Session of the United Nations General Assembly in New York.

The current African Union (AU) chair will join some 170 world leaders, including Pope Francis, for the meetings.

Mugabe was seen off at the Harare International Airport by his two deputies Emmerson Mnangagwa and Phelekezela Mphoko.

Zimbabwe to import maize till 2020