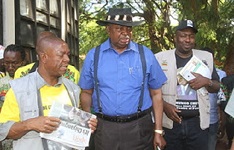 ZIMBABWE – Mphoko, one of Zimbabwe’s two vice presidents appointed by President Robert Mugabe last year, checked into the executive suite of the five-star Rainbow Towers Hotel in Harare on December 14, 2014 and had continued to stay there at the taxpayers expense, according to reports.

Mphoko said he was waiting for government to find a “suitable home” for him.

The vice president’s hotel stay had infuriated many, with human rights activists saying the money used for his accommodation could be channelled towards underfunded sectors such as health and education. NewsDay quoted a government insider on Wednesday as saying Mphoko had finally agreed to leave the hotel.

“The vice president has finally settled for a house in the Grange and we will be making some payments soon,” the source was quoted as saying, adding: “The property is valued at between $3.5m and $4m.”

It was not clear when Mphoko would move into his new home.

The report also quoted Local Government Ministry Permanent Secretary George Mlilo as admitting that government had finally secured a house for the vice president, declining, however, to reveal its location and value.

Media reports in January indicated that Mphoko’s wife, Laurinda had rejected three houses, among them, a mansion in Harare’s affluent suburb of Ballantyne Park worth R41.8 million, claiming that it was too small for a person of the VP’s stature.

The Mphokos, the reports said at the time, also refused to move into a house left by the late vice president Joseph Msika in Harare’s leafy suburb of Mandara, saying they wanted a house of their own, not the one vacated by others.

ZIMBABWE - Mphoko, one of Zimbabwe’s two vice presidents appointed by President Robert Mugabe last year, checked into the executive suite of the five-star Rainbow Towers Hotel in Harare on December 14, 2014 and had continued to stay there at the taxpayer...
Share via
x
More Information