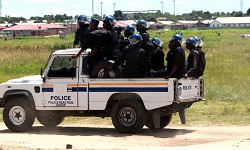 5.3kViews
0 Shares Share on Facebook Share on Twitter
ZIMBABWE – The brutal police reaction to what were supposed to be peaceful demonstrations in Harare and Chitungwiza last week, as well as the barbaric detention of NewsDay journalists is symptomatic of a regime that is cornered.

Police on Tuesday reacted swiftly to thwart demonstrations by commuter omnibus operators who were protesting against what they deemed to be unfair practices by the Chitungwiza Town Council.

The town resembled a war zone as police indiscriminately beat up protestors and even innocent residents who had not taken part in the demonstration.

Victims included three juveniles who were arrested together with 31 residents that were accused of causing violence.

The three were saved by the Zimbabwe Lawyers for Human Rights after spending three nights in custody as they were given bail on Thursday.

Tuesday’s arrests and indiscriminate beating of residents came hard on the heels of the savage beating of a group of civil servants who had tried to stage a demonstration in central Harare the day before.

On the same day, municipal police were engaged in running battles with touts, resulting in the death of a Chitungwiza resident.

As if that was not enough, on Wednesday menacing detectives visited Alpha Media Holdings seeking to arrest journalists over a NewsDay story that alleged Central Intelligence Organisation (CIO) operatives had been paid bonuses ahead of other civil servants.

Last year the Constitutional Court ruled that Section 31 of the Criminal Codification Act, which criminalises publication of falsehoods was unconstitutional.

The continued use of the section by police shows that President Robert Mugabe’s government is not willing to let go of its tools of repression despite the adoption of a progressive Constitution in 2013.

Mugabe’s acolytes still want to live in the past where his government ruled through fear with the help of colonial legislation such as the Law and Order Maintenance Act.

The Stone Age tactics were on Friday justified by Mugabe’s spokesperson George Charamba who was quoted threatening to throw journalists into Chikurubi Maximum Security Prison for reporting on goings-on in the security sector.

Charamba was repeating threats made by Information minister Chris Mushohwe last month, who described the security sector as sacred.
The two were being mischievous to suggest that the security sector cannot be scrutinised by the media, yet these are institutions bankrolled by taxpayers and have to be accountable.

Zimbabwe has a painful past occasioned by the unchecked abuse of the security sector by the rulers and journalists are within their rights to keep them in check by alerting society when securocrats start showing signs of unprofessionalism by dabbling in politics.

Memories of Gukurahundi, Operation Murambatsvina and electoral violence are still fresh in the minds of many Zimbabweans who know the perpetrators.

In fact, only an incorrigible dictatorship would dare to suggest that there are certain arms of government that are no-go areas for journalists.

The arrest of journalists is meant to silence the vibrant independent press in Zimbabwe, but history shows that such tactics are bound to fail spectacularly.

Mugabe’s government has in the past banned publications and tortured journalists, but it has failed to eradicate the voices of reason.
Similarly, critics of the government have been made to disappear, while others were killed but this has not cowed those fighting for democracy.

The government is clearly running scared because of the mounting problems brought about by the imploding economy and the authorities would put down ruthlessly anyone showing dissent.

However, the thuggery will not go unpunished forever and one day the masses will be delivered from the clutches of this ruthless government.

Mugabe's enforcers live in the past

ZIMBABWE - The brutal police reaction to what were supposed to be peaceful demonstrations in Harare and Chitungwiza last week, as well as the barbaric detention of NewsDay journalists is symptomatic of a regime that is cornered.  Police on Tuesday reacted...
Share via
x
More Information
x