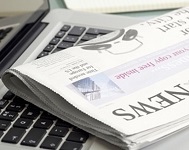 ZIMBABWE – Zimbabwean President Robert Mugabe’s nephew, Patrick Zhuwao, has threatened to sue the state-owned Herald newspaper over a statement made by one of its columnists, Reason Wafawarova.

According to Zhuwao’s lawyer, Christopher Dube-Banda, the opinion piece which was published on February 18 sought to portray the youth and empowerment minister in a “bad light”.

Dube-Banda claimed in a letter addressed to the Herald editor, Ceaser Zvai, that the article by the foreign-based columnist was aimed at tarnishing Zhuwao’s public image.

In his opinion peace, Wafawarova suggested that the minister had links to a Zanu-PF faction known as the Generation 40 (G40), which is allegedly fighting to stop Vice President Emmerson Mnangagwa from succeeding Mugabe when he finally leaves office.

Zhuwawo’s lawyer said if the state-owned publication failed to retract and offer an apology within the next two days, the minister would be forced to take legal action against the paper and its columnist.

Zhuwawo recently distanced himself from the G40, saying reports that linked him to the group were “mischievous” and were aimed at discrediting him.

ZIMBABWE - Zimbabwean President Robert Mugabe's nephew, Patrick Zhuwao, has threatened to sue the state-owned Herald newspaper over a statement made by one of its columnists, Reason Wafawarova. According to Zhuwao's lawyer, Christopher Dube-Banda, the op...
Share via
x
More Information
x